THE SPINNERS; Truly Yours (Kent) 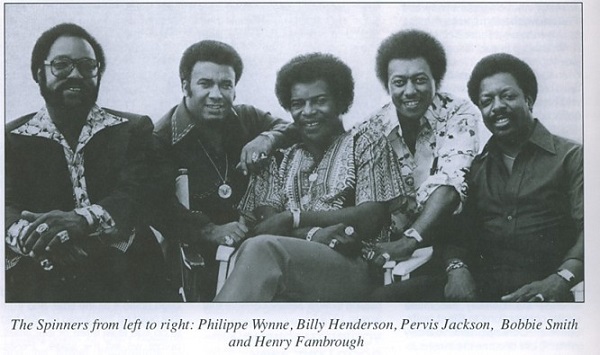 Most soul collectors know that the Spinners had a career that predated their wonderful Atlantic golden period. Said collectors will point to their classic 1970 Stevie Wonder-penned ‘It’s A Shame’. Proper soul fans though will know that long before that hit the Spinners were crafting great music that, sadly, till now has been largely ignored.

The group’s pedigree goes back to 1954 when as The Domingoes, the core of what was to become the Spinners played the local Detroit talent shows – on one occasion beating the Matadors (later to become the Miracles) to top spot. After a name change to The Spinners (said to come from the shiny hub caps on Cadillac cars), the group signed with Harvey Fuqua’s Tri-Phi Records where they scored a hit with the doo-wop flavoured ‘That’s What Girls Are For’. Business problems eventually brought Fuqua to Motown and a shrewd Berry Gordy cherry-picked some of the best Tri-Phi acts – including Junior Walker, Johnny Bristol and The Spinners. The fivesome recorded regularly at Hitsville but the hits eluded them. The parsimonious Gordy though kept them on and used them as studio backing vocalists, office gofers and even record box packers! By 1967 Gordy deigned to allow The Spinners to release their debut LP and it’s that album that forms the core of this magnificent collection. ‘The Original Spinners’ contained 12 tracks … essentially an assemblage of the singles the group had recorded since 1963. Collectors will be aware of stuff like ‘I’ll Always Love You’, ‘Truly Yours’, ‘For All We Know’ and the mighty ‘Sweet Thing’ (if you get the chance, check out Georgie Fame’s cover of the song) but there are lots of other goodies too like ‘Where Is That Girl’ and ‘How Can I’ and for good measure ‘That’s What Girls Are Made For’ was included too. Surprisingly, this is the first time that that original album has been available on CD

Here generous Kent have augmented the original LP with no less than 14 bonus cuts – ten of which have lain in the Motown vault till now. They include the doo-wop flavoured ‘Darling’ and ’12 O’clock’, the pacey ‘We’re Gonna Be More Than Friends’ and a great take of ‘Tea House In China Town’ (a song most usually associated with The Four Tops). Like the rest of this collection they’re all perfect 60s Motown confections… great stuff!