THE SOUL MOTIVATORS; Do The Damn Thing (Do Right Music) 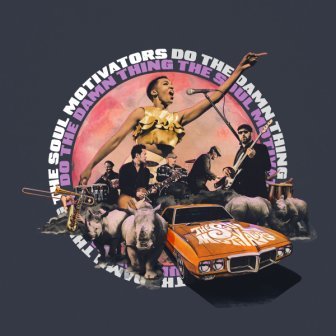 THE SOUL MOTIVATORS are considered Canada’s premier funk band and it was the back end of 2019 when they flagged up the release of this new album by releasing the set’s title track. We said then that ‘Do The Damn Thing’ (the track that is) is uncomplicated, brassy, old school, raw funk! Lead vocalist Shahi Teruko told us then that the song’s title came from “a phrase we used during rehearsals to get us back on track when we started to overcomplicate things.” And that policy and tough, rough,raw funk sound is apparent right through the 10 tracker.

Big voiced Ms Teruko leads the charge on items like ‘Drag And Drop’, ‘Say What You Mean’, ‘All the Way To The Bank’ and ‘Mindblastin” She stands back to let the band stretch out on the instrumentals ‘Savalas’ and ‘Black Rhino’ while on the wild, James Brown flavoured ‘Tell Me’ she shares the vocal spotlight with the song’s creator, Florida funkster, Rickey Calloway who does a great take on the Godfather’s sound and style.

The album offers (thankfully) two lovely down moments which show that there’s much more to Ms Teruko that chest-beating bravado. First up there’s the semi-ballad ‘Miss Those Days’ which is attractive but outshone by the album highlight, ‘Modern Superwoman’ – proper old school soul music in the Daptone tradition… poignant and introspective, it’s the single in—waiting.