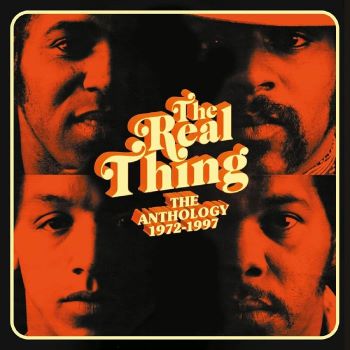 Last year Scouse soulsters  the Real Thing celebrated 50 years in the music biz (specifically, 45 as “the Real Thing”).The anniversary coincided with a renaissance in their work. There was a stunning TV documentary about them, major tours were lined up (the pandemic, of course, put paid to ‘em) and BMG Records issued a ‘Best Of…’ collection to add to an already extensive selection of anthologies on the band.

A year on and now Cherry Red/Cherry Pop have just released yet another Real Thing retrospective – but this one is markedly different to anything that’s  gone before. You see it’s the most comprehensive collection yet – a fact reflected by the contents – 109 tracks, across 7 CDs! Yep, it’s all here (almost, we’ll explain later). There are expanded versions of all the Real Thing’s Pye albums – ‘Real Thing’, ‘4 From 8’, ‘Step Into Our World’ and ‘…Saints Or Sinners?’. Then there’s 3CDs worth of  B-sides, 7-inch single edits, 12-inch extended versions, remixes, instrumentals and standalone singles with many of the tracks featured having never previously been released on CD or digitally. The cuts chiefly come  from the band’s time at Pye Records (the case with previous collections) but there’s material licensed from EMI, RCA, Jive Records as well as a smattering of tracks released on a couple of independent labels.

The big hits  – things like ‘You To Me Are Everything’, ‘Can’t Get By Without You’ and ‘Can You Feel The Force’ – still shine while the majestic and oft covered ‘Children Of The Ghetto’ – a track from the group’s second LP – ‘4 From 8’ – remains a chief focus. The box set also includes plenty of other great music… stuff like the Motown-esque ‘Stone Cold Love Affair’, ‘Love Is Such A Wonderful thing’, ‘You’ll Never Know What You’re Missing’, ‘Raining Through My Sunshine’ and the “lost” 1982  track ‘Street Corner Boogie’; they all underline the fact that what US vocal groups could do, Scousers could do just as well! To prove the point, the band were even confident enough to have a go at the 4 Tops’ ‘I Can’t Help Myself’ onto which they grafted snatches of ‘It’s The Same Old Song’. Lead singer Chris Amoo does a great Levi Stubbs! But maybe we don’t need two versions of it – original and extended. And that’s an issue with this collection – yes, it sets out to be comprehensive, but do we need 5 versions of ‘Can You Feel The Force’ and  4, 3 and 2 versions of  plenty more?

Omitting some of them might have made way for some really interesting “extras” – like some material from the Chants (the precursor group to the Real Thing), maybe some of the material they cut with David Essex (they were his backing group, remember?) and what about the Real Thing’s ab fab version of ‘Eleanor Rigby’ (Paul McCartney’s thinks it’s the best cover of the song, by the way). Then there’s a Pye track called ‘Someone Oughta Write A Song About You Baby’. This one was recorded at around the same time as ‘You To Me Are Everything’ but lay unissued till the aforementioned 2019 BMG compilation included it. It’s conspicuous by its absence here. Yes, I know some of these recordings were made outside this collection’s time frame but maybe the time frame needed to be more elastic. Then coming right up to date, modern  soul fans will know and love the Brit Funk Association’s ‘Smilin’’ – which featured a stunning soul vocal from Real Thing-er, Chris Amoo. Now that would have made this set truly comprehensive!

Those small gripes/suggestions, however, don’t detract  from the quality of this  ‘Anthology’ nor take anything away from the achievements of the band;  a band that paved the way for the whole Brit funk/soul scene (where would Hi Tension and Light of the World be without the Real Thing?). The band, remember, are still out there doing it… albeit now a duo (Chris Amoo and Dave Smith). Catch them at a theatre near you any time soon… you won’t regret it!