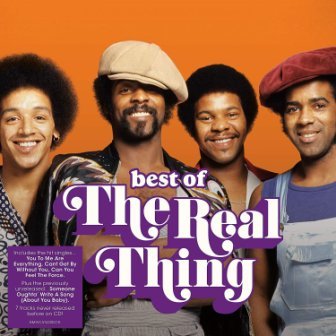 In 2020 Liverpool’s the Real Thing will be celebrating 50 years in music and to commemorate the occasion BMG have just released this new ‘Best Of…’ set and the 2 CD, 31 track collection really does show what an important and successful team the Real Thing were… indeed are. The quartet emerged from Liverpool’s Toxteth area in 1970 with one band member, Eddy Amoo joining the ranks after a spell with seminal Liverpool band, the Chants – for whom the Beatles once provided live backing at the famous Cavern!

There have been a few Real Thing ‘Best Of’ sets before but the USP of this new collection is a previously unissued recording … the jaunty and soulful ‘Someone Oughta Write A Song About You Baby’. Penned by Ken Gold and Mick Dene, it has all the charm of the same team’s ‘Can’t Get By Without You’ and ‘You To Me Are Everything’…. both massive hits and the centre pieces of this collection. They’re included in original formats and in 1986 remix formats… they all still sound good.

The album’s other big focus is ‘Children Of The Ghetto’ – a track from the group’s second LP – ‘4 From 8’, an ambitious and seriously themed album about their native Liverpool and the difficulties of life for immigrant communities. Interestingly the Beatles wanted to record a “Liverpool LP”… they only ever laid down ‘Penny Lane’ and ‘Strawberry Fields’… where the Beatles failed, the Real Thing succeeded! Whatever… ‘Children of The Ghetto’ has become something of a soul and jazz standard covered by people like Courtney Pine, Mary J Blige and Phillip Bailey.

‘Best Of…’ includes plenty of other great music… stuff like ‘Love Is Such A Wonderful thing’, ‘You’ll Never Know What You’re Missing’ and ‘Raining Through My Sunshine’ – all underlining what we’ve just said – “an important and successful team the – Real Thing”. This compact little collection would make a great little stocking filler for the soul fan in your life!