THE PENDLETONS; 2 Steps Away (Bastard Jazz) 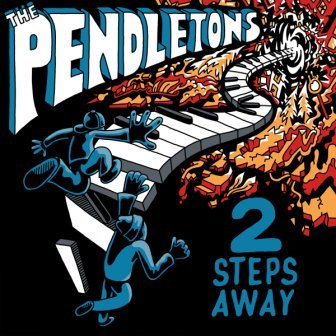 THE PENDLETONS are am experimental soul and funk duo working in and around San Francisco. They are E da BOSS and TRAILER LIMON and they debuted in 2010 with the well-received single ‘Coming Down’/’Waiting On You’. They won themselves a cult following – amongst those – fans Gilles Peterson – who licensed some their music for his ‘Brownswood Bubblers’ compilation. Always a sign of quality!

Then this spring the soul world enthused mightily over a Pendletons single ‘You Do You’/ ‘Life To Me’. The former became particularly popular on the modern soul scene and featured a wonderful guest vocal from Howard Johnson from Niteflyte; the latter had a lovely 70s/80s vibe to it and though we were told there was a full album on the way, we’ve had to wait till now for ‘2, Steps Away’. The good news though is that the concise 9 tracker delivers what that single promised – that’s to say a thoroughly contemporary soul album with its roots in soul and dance’s rich heritage.

As with that exceptional single, the duo use special guests to help them flesh out their other ideas. First up there’s Gizelle Smith, the front woman of The Mighty Mocambos and daughter of a band-member of the legendary Four Tops. Her pedigree shines through on the busy, bustling ‘Keep Working’. Long time collaborator K-Maxx is upfront on ‘No Regrets’ – which channels that lovely 80s weekender vibe, Feli’s at the mic for the bumpy, jazzy ‘There Goes My Mind’ while Ishtarr storms the barricades on the soulful house tune ’19 Flavours’. To catch the essential Pendleton sound, though, try the opener, ‘Blessings For The World’ an intoxicating jazzy, R&B/soulful cocktail. Album highlight though is the set’s title track. It begins with sweet, harmonic scatting before developing into a smooth and sophisticated modern soul, sedate dancer… little wonder the band chose it as the album’s title and focus and it even has a spine tingling monologue!

Pendleton, E Da Boss has said “With this album we have tried to take boogie/modern soul back to its essence. We were happy to create with a room full of the Bay Area’s top musicians, who took our direction and turned our thoughts into magic.” I think they’ve succeeded magnificently…. another great 2019 album to add to the list!