THE ORIGINALS: Down To Love Town (bbr) 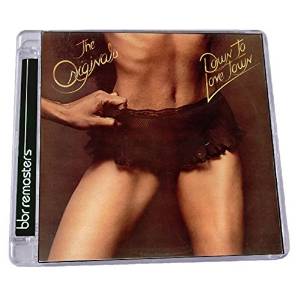 The Originals are responsible for one of soul’s most sublime moments. In 1969, under the tutelage of one Marvin Gaye, they cut ‘Baby I’m For Real’ – one of soul’s greatest harmony ballads and this most sensual of tunes catapulted the Motown second stringers into the limelight. But for all kinds of reasons, the group failed to consolidate on that success. Singles like ‘The Bells’ and ‘We Can Make It Baby’, though reasonably successful , never got them into the Soul Premier League, but the Originals kept on trying and a succession of albums (‘Portrait Of The Originals’, ‘California Sunset’ and ‘Communiqué’) kept their loyal fan base content without raising their profile into the mainstream.

So in 1977 the Originals hitched their star to the bandwagon called disco and released the ‘Down To Love Town’ album. Aimed straight at the glitter ball confraternity, the set’s just won reissue on the Cherry Red imprint, bbr, and it’s very much a timepiece. Tunes like ‘Hurry Up And Wait’, ‘You’re A Blessing To Me’,’ Six Million Dollar Man’, ‘Been Decided’ and the LP’s title tune are classic disco era artefacts. Sure, they’re classier and grittier than lots of contemporary disco dancers and the title song went to #1 on the disco chart (it also attained a decent #47 on the pop charts).

Much, much better (soul wise at least) are the set’s two slowies – ‘Mother Nature’s Best’ and ‘Sunrise’. On both, the foursome do what they always did best – sing with a conviction, swopping leads and drenching everything in remarkable vocal harmonies. Great stuff.

Oddly (and some might say niggardly) this reissue comes with just one bonus track – an alternative (shorter) version of ‘Down To Love Town’. Its inclusion makes the reissue’s tracks number a mere 8, probably limiting investigation to the serious group collectors.