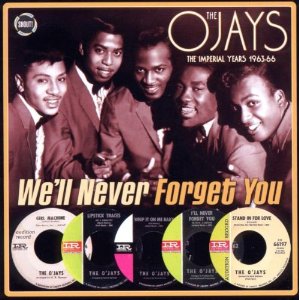 To most music fans the O’Jays are synonymous with the Sound Of Philadelphia but the group have a long pedigree that pre-dates their role in the Gamble and Huff story and this new Shout 28 tracker allows us to catch up on part of that back story. The set chronicles their time at Imperial Records (1963- 66) and includes every track they cut for the set up.

Originally formed as a five piece in Canton, Ohio and known as the Mascots they were first signed to King Records, then after a name change to the O’Jays (after a local DJ, Eddie O’Jay who became their manager) the group worked for a variety of labels including Daco, Apollo and Little Star before pacting with New Orleans based Imperial in 1963. They were seen by label execs as a vehicle to cash in on the then burgeoning and profitable soul harmony group scene and their performances for the label are in a variety of styles. The most memorable cut on the set is that perennial Northern soul favourite ‘I’ll Never Forget You’. It’s a great mid 60s Motown pastiche – hardly surprising since it was written by Jack Ashford who also played on the session along with Dennis Coffey, Mike Terry and Bob Babbitt. On other cuts – the wonderful ‘Lonely Drifter’ and ‘Lipstick Traces’ – the group strive for a Drifters sound… and they succeed. But what makes the music transcend karaoke style mimickry is the passion of the lead vocalists (either Eddie Levert or William Powell), the commitment of the musicians and backroom staff (people like H B Barnum and Don Davis) and the quality of the material. The songs already mentioned are the better known ones, but the album is stuffed with top notch, 60s group soul creations like ‘I’ve Cried My last Tear’ (covered in the UK by Cliff Bennett and the Rebel Rousers), the beautiful ‘It Won’t Hurt’ (a Pam Sawyer ballad) and the wailing New Orleans chestnut ‘Time Is On My Side’.

After Imperial, the O’Jays moved across to sister label, Minit where ‘Working On Your Case’ became a classic; then they were off to Bell before, in 1969, signing to Neptune and hooking up with Kenny Gamble and Leon Huff and the rest, of course, is history. But investigate this album and you’ll discover that this particular part of the O’Jays story is no less fascinating.