THE O’JAYS: ‘The Best Of The O’Jays’ (United Souls) 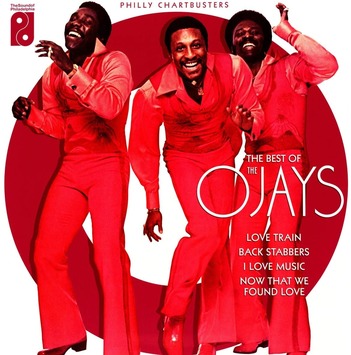 Though their name is synonymous with Philadelphia, the so-called “City of Brotherly Love,” The O’Jays hailed from Canton, Ohio, in the US Midwest, and had enjoyed a string of US R&B chart entries for the Imperial, Bell, and Neptune labels between 1963 and 1970  before they landed at Philadelphia International in 1972. It was from that point, though, under the aegis of songwriters and producers Kenny Gamble and Leon Huff, that the group consisting of Eddie Levert, Walter Williams, and William Powell became soul music superstars, scoring an R&B No. 1 with ‘Back Stabbers,’ their debut single for the CBS-distributed company. Alongside The Three Degrees and Billy Paul, The O’Jays helped to put Philadelphia on the soul music map in the early ’70s, scoring a stack of memorable hit singles and albums that brought them immortality.

The group’s fertile Philadelphia years are chronicled by this double vinyl LP, ‘The Best Of The O’Jays,’  released via the new Snapper imprint, United Souls. Spanning 1972 to 1984, it contains sixteen of the group’s most famous tunes; ranging from the passionate Utopian anthem ‘Love Train’ to ‘For The Love Of Money,’ a gritty fable about the so-called “root of all evil”  built on a monster of a bass line, and the charging disco groove,  ‘I Love Music.’  The set also includes the group’s original 1973 version of ‘Now That We Found Love,’ which, curiously, was never released as a single. (It took the Jamaican reggae group Third World to take it into the charts five years later). The group’s gospel foundations can be detected in ‘Livin’ For The Weekend,’  with its fervent call and response cadences; after a slow bluesy intro, it explodes into a pulsating dance track driven by churchy piano chords that are enhanced by slick orchestration.  Other gems on the compilation include ‘992 Arguments,’ the chart-topping  ‘Use Ta Be My Girl,’ and the sweetly soulful ‘Brandy,’ which all illustrate the group’s dynamic vocals meshing perfectly with Gamble & Huff’s sparkling production sound.  It was a musical marriage made in heaven and is probably why the songs on this LP sound so good today. A great overview of one of soul music’s most important vocal groups.