THE NEXT MOVEMENT: The New Movement (Leopard) 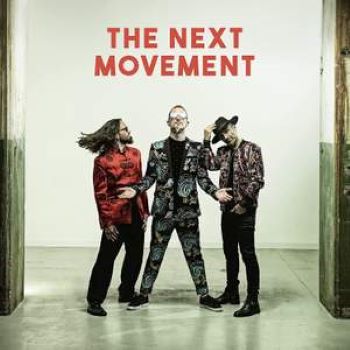 The Next Movement is a Swiss trio consisting of music biz vets, J.J. Flueck (drummer and singer), Pascal “P” Kaeser (bassist) and Sam Siegenthaler (guitarist).The three came together as unit via their shared love for funk and the music of people like James Brown, Jimi Hendrix, Prince and Miles Davis and the influence of those luminaries can be heard right through their (huge!) 19 track eponymous album. Like that legendary quartet, the Next Movement are prepared to experiment and push boundaries, so expect the unexpected.

The overridng flavour of the album is electo funk à la Prince, but throw in a genrous garnish of Rick James and the whole Clinton/Funkadelic circus too. That funk is almost unrelenting and is probaly best typified by the cut, The Glorious Return Of The Funk which suggests we need a funk vaccination – an interseting alternative to the Pfizer and Astra Zeneca! The cut boasts a huge bass line in the manner of Rick James on the Temptations‘ Standing On The Top. Maybe the plagiarist lawyers should have a listen!

Sprinkled through the hard funk are several oddities, like the brief, gentle Spring (Not As Planned) (more of that later) while the album boasts what sound like a couple of Hall and Oates pastiches. The Hendrix influence on guitar man Siegenthaler is patently obvious too – notbaly on the album’s only cover, a crashing version of the Beatles‘ Come Together.

As promsied, back to Spring (Not As Planned). It seems that with that one and cuts like Summer (But Different), Early Autumn (Everything Gonna Be Alright) and Early Winter (TNM party) that the LP is some kind of concept album, but the concept was lost on me. As was the idea behind the last track – Winter Feat. Tumbleweed (The Longest Snare In The World). It runs for over 15 minutes and it’s just the sound of a snare drum snap fading out! I’ll see if it’s in the Guinness Book Of Records! It’s odd, as is much of the album. So, file this one under  intersesting/intriguing.