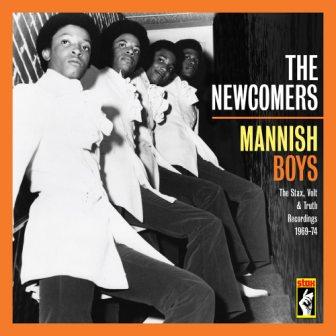 The mighty Memphis-based Stax label wasn’t particularly noted for its vocal groups. The label boasted countless chest beating soul men and heart-rending soulstresses, but harmony groups…. well not that many. There was, of course, the Mad Lads and the Astors (whose ‘Candy’ stands as one of Stax’s greatest recordings) and then, after decamping from Detroit, the Dramatics flew the group banner over McLemore Avenue. There was, however, a fourth Stax vocal group … a group that enjoyed a longish tenure at the label, but, for all kinds of reasons they never broke out and remain largely unknown save to hard core soul collectors.

This fourth group were all local Memphis boys – the Newcomers. Bertram and Randy Brown, Terry Bartlett and William Sumlin came together in their teens and joined Stax in 1969 but between then and 1974 the label issued just 11 tracks on them. UK reissue label, Ace, have here gathered them all together and along with 13 recently discovered masters and demos we have, at long last, a full album on the Newcomers.

Musically the Newcomers come across as a classic harmony group but with a soulful muscle bred in the South. Their biggest hit though was oddly untypical. 1971’s ‘Pin The Tail On The Donkey’ was a blatant Stax attempt to recreate the sound of the Jackson 5. It rose to #28 on the R&B charts but the much delayed follow up – more novelty in the form of a cover of ‘The Martian Hop’ flopped. The B-side to that one, by the way, was another throwaway novelty – ‘Humpty Dumpty’.

Much, much better was 1974’s ‘Keep An Eye On Your Close Friends’. The Homer banks song is a tough dancer and the same writer’s ‘The Whole World’s A Picture Show’ is another album standout here. Of the previously unreleased material ‘I Don’t Want To Lose You’ is outstanding – a great late period Stax outing.

On a biographic note, anoraks will know that Randy Brown left the Newcomers in 1970 for a moderately successful solo career. Brown fans can catch up on his early career here and at the same time enjoy a long neglected chapter in Stax’s history.