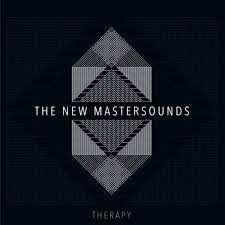 The New Mastersounds blasted out of Leeds in the 90s and over the years and through various personnel changes (Corinne Bailey-Rae was a sometime vocalist) they’ve built up a loyal following particularly on Continental Europe. ‘Therapy’ is their ninth LP and it follows much the same pattern as their previous eight; that’s to say that the set’s mainly a collection of funk and jazz spiced instrumentals with a sprinkling of soulful vocals to add variety.

Here the principal vocal guest is Kim Dawson. She takes lead on the light, soul groove that is ‘I Want You To Stay’…. a very pleasant tune with a touch of Latin about it. Kim’s much more strident on the tough ‘Soul Sista’. This one really struts its stuff and the band are in great from. The other vocal is the poppy ‘Stop This Game’. The male vocalist isn’t credited on my copy (a band member?) but the tune’s a lot lighter than the typical Mastersounds thing.

To hear that “typical” sound at its best go to the album’s only cover tune – Bruno Mars’ ‘Treasure’. It’s a great soul-jazz take on the young man’s song and it reminds me of the way that the great soul- jazzers of the 60s took the pop and soul hits of the day and quite transformed them. Think here of CTI period George Benson. ‘Treasure’ is this album’s highlight and already drawing attention from the jazz stations.

Other goodies? Well, ‘Monday Meters’ is a loose and gritty tribute to New Orleans’s finest, ‘When It Rains’ takes more colours from the soul-jazz palette, while ‘Detox’ is a slow, bluesy workout. On the debit side ‘Old Man Noises’ lacks focus while ‘The Whistle Song’ doesn’t work… for me at least. Whistling and funk seem odd bed fellows, but, as ever, make up your own minds @ www.legere-recordings.com