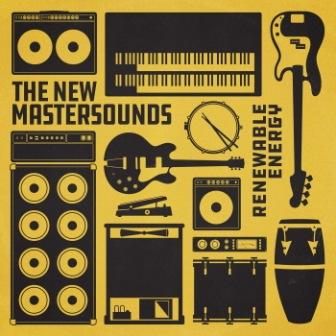 Originally from Leeds, the New Mastersounds have been around for almost 20 years and they have something like 15 long players under their belt. Despite that, the band (Eddie Roberts (guitar), Simon Allen (drums), Pete Shand (bass) and Joe Tatton (organ)) are probably best known for giving Corinne Bailey Rae her start. The reason for their inability to break into the big time is apparent on this new album…. what they create musically doesn’t pander to the mainstream. Their energetic brand of funk and soul-jazz is aimed very much at a niche market and I’m guessing that the foursome are quite happy with that (if not they’d have folded long ago). They’re rarely out of work – gigging constantly – as much at home at the big festival as in the small cellar club and their loyal fans turns out in numbers wherever they play.

Said fans will be delighted with the 12 tracks on ‘Renewable Energy’ – it provides what the Mastersounds have always provided. So, there’s plenty of funk – like the scratchy, percussive opener, “Chicago Girls’. I have to say, though, that this sounds more New Orleans than Windy City despite some lovely brass work from the West Coast Horns (Mike Olmos and Joe Cohen). There’s also plenty of mid 60s style, “Hammond to the fore” soul-jazz on the collection … try ‘Tantalus’ or ‘Green Was Beautiful’. ‘Stash’ shows the more experimental side of the band while ‘Swimming With My Fishies’ is a lovely, mellow, cinematic way to finish the album.

The long player boasts one vocal – a meandering, funk workout fronted by a feisty, swooping Adryon De Leon. In truth it’s not that remarkable – a workmanlike funk outing. Indeed that’s the issue. This is a workmanlike album…. nothing to make you sit up and take real notice and help take the band to the next level (if indeed that’s where they want to go).

Interestingly I note that the album was recorded in two venues – New Orleans and Denver – back in 2016 and February ’17… may be the Mastersounds have something newer/fresher up their sleeves?