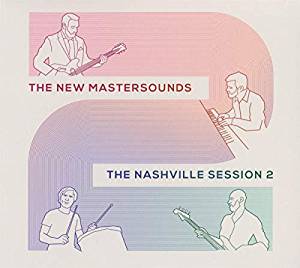 Originally from Leeds, the prolific New Mastersounds have been around for quite some time and despite being the band that gave Corinne Bailey Rae her start the Mastersounds have never really cracked the big time. Not that that seems to bother the group’s core –Eddie Roberts (guitar), Simon Allen (drums), Pete Shand (bass) and Joe Tatton (organ). They’re content to enjoy what they do best – playing live and recording the jazz and funk that is their driving force. Indeed the team have a raft of albums under their belt – the last one being ‘Renewable Energy’ from earlier this year.

Amongst the band’s back catalogue is an LP they cut back in 2016 in Nashville. Imaginatively titled ‘The Nashville Sessions’ it became one of the Mastersounds better sellers. so their latest LP offers more of the same…. ‘Nashville Sessions II’. The ten tracker was recorded in the same Nashville studio as volume 1 and like it, it was recorded live in front of an audience straight onto audio tape. The soundscape is much the same too… indeed the signature Mastersounds sound – rough hewn soul-jazz and leggy, loose funk . There is though a subtle difference; this time around Joe Tatton eschews the organ to play various pianos and a vintage analog synth. Despite that, what’s produced is typically New Mastersounds – best exemplified by tunes like ‘Dusty Groove’ and ‘Pudding And Pie’. Both those and indeed all bar one of the cuts are band originals; the only cover is a take on John Cameron’s cult classic ‘Afro Metropolis’.

The New Mastersounds press people say that this album “perfectly captures the energy of the band” and that it’s “an essential buy for band devotees“. And that just about sums things up. The energy positively crackles here; equally there’s not enough light or shade or subtlety to attract those outside the band’s immediate fan coterie.