THE NEW MASTERSOUNDS; Made For Pleasure (Legere) 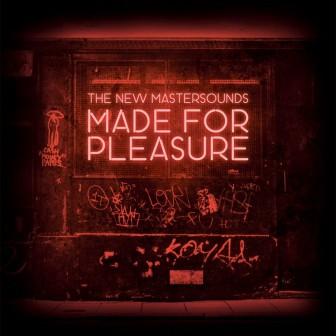 The New Mastersounds burst out of Leeds way, way back and en route to this, their tenth long player, they’ve won countless friends right across the soul and funk communities (they also gave Ms Corinne Bailey Rae proper start, remember?)

The band’s essential core is Eddie Roberts (guitar), Simon Allen (drums), Pete Shand (bass) and Joe Tatton (organ) but here they augment their sound with the addition of Mike Dillon (vibes and percussion) and Joe Cohen and Mike Olmos (“the West Coast Horns”) and it’s those horns that add some colour to the Mastersounds signature funk. Don’t get me wrong though, there’s still plenty of that sparse, scratchy funk on offer…. notably on the title cut, ‘High & Wide’ and ‘Sitting On My Knees’… all redolent of the sound of the great Meters: hardly surprising, the album was recorded way down yonder in New Orleans!

As with all Mastersounds album, you get plenty of variety as an antidote to the hard funk overdosing. First up there’s the reggae-fied ‘Fancy’ (with input from Spellbinder), then there’s a jazzy guitar workout called ‘Cigar Time’ followed by a slow and sensual ‘Pho Baby’. Two big vocals too featuring Charly Lowry. She’s fine and feisty on the funk meander that is ‘Enough Is Enough’ but much more at home on the more focused ‘Just Gotta Run’. This is the band’s homage to the Northern scene and they get it just right and those horns we mentioned before are a delight… shades of mellow moment Tower Of Power.

The New Mastersounds’ ‘Made For Pleasure’ is out now on CD, LP and digitally.