THE NEW BIRTH; Ain’t No Big Thing/Coming Together (Super Bird 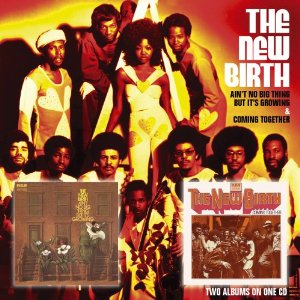 The New Birth were a Harvey Fuqua concept band who grew out of two of his other protégés, the Nite Liters and Love, Peace And Happiness. The coming together of The New Birth also involved three other outfits – The Gentlemen and I, The Mint Juleps and Duet. Fuqua’s idea was to create a wide-ranging ensemble who could handle all kinds of material but it was all very complicated and unwieldy, though by 1971 a 12 piece New Birth recorded a debut album for RCA. In 1972 the group enjoyed a kind of novelty hit with a cover of Perry Como’s ‘It’s Impossible’. The following year the band was trimmed down and new personnel came in – notably Ann Bogan, a former Motown Marvelette – and the group’s sound became tighter and certainly more focussed.

This new Super Bird twofer will allow you to evaluate the group’s early days and that decisive change of style. Here we get the 1971 LP (their second) ‘Ain’t No Big Thing But It’s Growing’ and ’72’s ‘Coming Together’. On the former you can enjoy that ‘It’s Impossible’ hit and though you can see what the band and Fuqua were striving for, it doesn’t quite come off. Other songs covered on the set include the Five Stairsteps’ ‘Ooh Child’, The Everly Brothers’ ‘Let It Be Me’, James Taylor’s ‘Fire And Rain’, Bread’s ‘Make It With You’ and the old chestnut ‘Never Can Say Goodbye’. I don’t think anyone will take issue with me if I say there’s plenty of better versions of these songs around. The set’s completed with a selection of Fuqua songs, but again he’s written better material than ‘How Good It Feels’ and ‘Oh What A Feeling’.

’72’s ‘Coming Together’ is a slightly better bet but even there there’s the odd aberration like a stab at the standard ‘All The Way’ and a not so brave attempt at attacking Gladys Knight’s ‘I Don’t Want To Do Wrong’. The cover of Wilson Pickett’s ‘Don’t Knock My Love’ is decent enough and some of the original songs like ‘African Cry’ are averagely typical of the early 1970s. I guess it’s good to have the albums on CD, but I would never call them unmissable –   70s soul footnotes, I’d say, and possibly only of interest to anorak collectors.