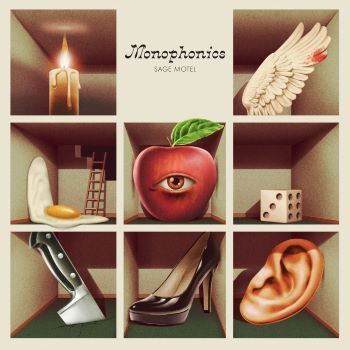 Over the last half decade or so, the Kelly Finnigan-led band, The Monophonics have built quite a following amongst the more adventurous soul crowd. Finnigan, whose father had played keys in numerous soul bands and at one time was MD for Etta James, sometimes records solo and sometimes with the Monophonics and his releases are never predictable, safe or bland and the concise ten tracker that is ‘Sage Motel’ underlines  that very point!

‘Sage Motel’ is what in old-fashioned times would have been called a “concept album”. Finnigan’s people tell us that the “concept” behind the LP is “the grand re-opening of the once thriving, once vibrant establishment, the legendary Sage Motel. A place where folks experience the highs and lows of human existence. A place where big dreams and broken hearts live, where people arrive without ever knowing how they got there. It’s where individuals find themselves at a crossroads in life.”

In keeping with the concept, the album opens with a brief instrumental, ‘Check In ’ and closes with  a similar sounding (you guessed it!) ‘Check Out’ . In between there’s all kinds of flavours and sounds (though most retain the spaced out, atmospherics of the intro and the outro) but whether they chime with the album’s theme is for you to decide.

The track winning all the plaudits right now is the big and brash, ‘Warpaint’ which seems to cover all kinds of bases… a  Northern soul beat, rocky, riffing guitars, a wild vocal that starts off in Curtis Mayfield mode and a full-on production. It’s right in your face from the start!

Less taxing are the ballads of which there are three splendid examples – the shifting ‘The Shape Of My Teardrops’, the dramatic ‘Never Stop Saying These Words’ and the more tortured ‘Crash And Burn’. On all three there’s almost a kind of Delfonics thing going on – but a tougher thing altogether.

Equally rough-hewn is the undisputed (to these ears at any rate) album highlight… the groove-heavy ‘Love You Better’ which is sort of Curtis Mayfield meets Southern soul (you night have guessed by now that dear old Curtis is  a particular hero of Finnigan’s). It’s a lovely cut.

Finnigan calls the Monophonics’ sound “a mix of heavy soul and psyche rock” while their label, the envelope-pushing Colemine, call the band “the world’s premier psychedelic soul band”. On the evidence of ‘Sage Motel’, you wouldn’t argue!