THE MONITORS: Say You… The Motown Anthology (Kent) 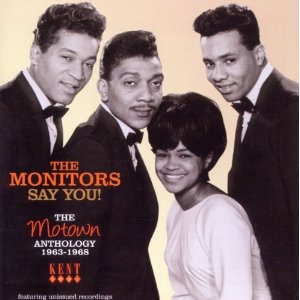 The Monitors were never part of the Motown elite. In their time with the Gordy set up they released just one LP and notched up a couple of minor hits but dogged collectors have always held the group in high regard. Now, with this first ever CD collection on the foursome (Richard Street, Warren Harris and Maurice and Sandra Fagin) everyone can enjoy what they had to offer – satisfying, Uptown group soul.

The CD offers 26 tracks. The first 12 consist of their ‘Greetings! We’re The Monitors’ LP and they’re followed by 12 previously unissued items and 2 B sides. Soundwise, it’s all classic mid 60s Motown with a lightness of touch that should remind you of same era Spinners. Funnily enough, like the Monitors, the Spinners didn’t enjoy too much success at Motown and needed to move on to become the stars they deserved to be; sadly, the Monitors didn’t get the opportunity to move on… they disbanded in 1971 when Street left to join the Temptations.

Highlights of this Monitors’ collection include the group’s biggest hits – ‘Say You’ and ‘Greetings (This Is Uncle Sam)’ and a pair of beautiful Smokey Robinson ballads – ‘You Share The Blame’ and ‘The Letter’. The former is a real delight. It boasts classic Smokey lyrics and melody and it’s believed that this is the only version ever recorded. The latter is possibly best known in the David Ruffin version and Ruffin’s stature possibly explains why the excellent Monitors’ version has lain in the vaults till now. Two more excellent previously unissued tracks are a version of the Motown chestnut ‘Too Busy Thinking About My Baby’ and a take on the Johnny Rivers hit ‘Poor Side Of Town’. That one is a defining example of sweet soul. For something a little more raucous, try the ‘Needle In A Haystack’ flavoured ‘Number One In Your Heart’ while the pacey ‘Time Is Passin’ By’ has already won its spurs on the Northern scene. The varied repertoire is given consistency by Street’s pleasing, pleading lead vocals… no wonder the Tempts were keen to recruit him as replacement for the ailing Paul Williams. That, though, takes nothing away from the Monitors themselves. They were solid performers who recorded quality songs backed by the supreme Funk Brothers… maybe they were just one group too many on an already overcrowded Motown roster.