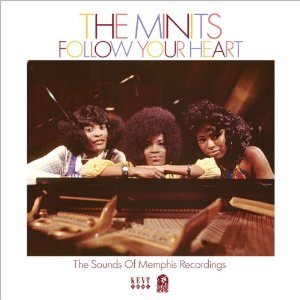 The Minits are one of soul’s great forgotten groups. The female trio – Mary Anderson and sisters Mary Ann and Carolyn Watkins – hailed from Montgomery, Alabama and after university they gravitated to Memphis to pursue their musical ambitions. There , in 1970, they were signed to Gene Lucchesi’s Sounds Of Memphis label and were handed over to producer/writer Dan Greer who’d heard Carolyn Watkins’s blistering backing vocals on a number of George Jackson’s Fame recordings. Greer was sure he’d found Memphis’ answer to the Supremes – or at least the Honey Cone, who were hot at the time and it’s the melodic pop/soul of those acts that he attempted to craft. For his Minits’ recordings, Greer brought in the famed Hi rhythm section and used the legendary Ernie Bernhardt to add string sweetening. That combination worked on eleven songs – six of which were released as A and B sides of three Sounds Of Memphis singles. But for whatever reasons none of the releases saw chart action and the Minits just faded off the radar.

Here Ace/Kent have assembled all the Minits’ Sounds Of Memphis recordings and you can try and work out why such superior music never made it commercially. Was it that their sound was “too southern” for mainstream radio? I don’t think so. The sound of the Minits veers to the poppier end of soul and much more muscular music was making it in the early seventies. My guess is that the Minits failed simply because their label failed to promote them properly (or weren’t prepared to pay what it took back then to get the radio exposure). Clearly they were never championed by the right people at the right time… but now, almost 40 years later, we can enjoy what the mainstream missed out.

Best cut on the album is the sophisticated soul of ‘Still A Part Of Me’. This was the A side of the girls’ second single and though it bombed, it has become hugely (and expensively) collectable on the underground scene. Almost as good is ‘Lover Boy’ which features some of those lovely Ernie Bernhardt strings. Elsewhere the previously unavailable ‘Love Letters’ is a Honey Cone ‘Want Ads’ sound-a-like while the double-entendre stuffed ‘If You Don’t Like My Apples’ is almost funky. Producer Greer was so convinced of the girls’ abilities that he even had them tackle an Aretha Franklin song. .. and what a great job they do on the Queen’s ‘Pullin”. This retrospective also boasts two mixes on a song called ‘Love Letters’. Again the song is heavily influenced by the Invictus sound but the previously unreleased mix (complete with attractive vibes) is well worth checking. It proves that with the right breaks the Minits could have been much more than a mere soul footnote.