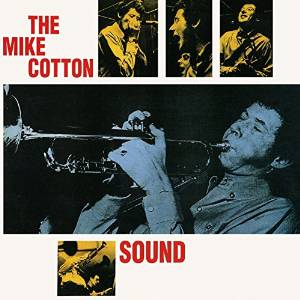 Readers of a certain vintage will have fond memories of the Mike Cotton Sound. Founded in the late fifties by trumpeter, Cotton, they started out as a trad jazz band but by the early 60s they’d morphed into a brassy, tight and punchy soul and R&B combo. Along with bands like Georgie Fame and the Blue Flames, Zoot Money’s Big Roll Band, Herbie Goins and the Nightimers, Cliff Bennett and the Rebel Rousers, Jimmy James and the Vagabonds, Geno Washington and the Ram Jam Band, The Fix and the Almost Blues they gigged all over the country offering soul starved mods a live version of the music they loved but were deprived of because of archaic musicians’ union regulations and limited radio airplay. By the mid 60s they were considered so good that they became the backing band of choice for visiting US soul stars like Sugar Pie DeSanto, Doris Troy, Stevie Wonder, the 4 Tops and Solomon Burke.

Popularity on the live circuit brought them a succession of record contracts (with Columbia, Polydor, Pye and MGM) but none of their 8 singles bothered the charts while their sole long player languished too, but ,as is the way with these things, it’s now hugely collectable and frighteningly expensive to buy (if you could find one, that is!)

This new RPM CD, thankfully, saves collectors that expense by conveniently bringing together all of the Mike Cotton Sound’s 60s output and the 27 track set is a wonderful, memory-jerking time piece. The core of the retrospective is the band’s eponymous LP. The music on the album was essentially what the band offered on their live shows and is a mix of covers and band originals that ape the soul and jazz sounds coming from the States in ’63/’64. Amongst the covers there’s spirited versions of ‘Watermelon Man’, ‘Night Train’ and ‘Poison Ivy’. Then there’s the singles. Most impressive is a cover of Bob and Earl’s ‘Harlem Shuffle’ with vocals from ex US air force man Bruce McPherson Lucas. Known simply as “Lucas”, he was brought in to give the group a more authentic sound (interestingly, they’d earlier auditioned and rejected someone called Joe Cocker!). Lucas is upfront too on a great version of Tony Clarke’s ‘Ain’t Love Good Ain’t Love Proud’ while those who like things a little mellower should try the lovely lilting ‘Make Up Your Mind’. You also get the group’s version ‘Soul Serenade’ which Mike Raven used as the theme to his Radio 1 soul show.

Sadly without commercial success, in 1969, the Mike Cotton Sound found a gig as backing band to Mary Hopkin, and then changed their name to Satisfaction and also changed musical tack towards a more progressive sound. When Satisfaction folded, Cotton went back to trad jazz, joining Acker Bilk’s band. He stayed with the clarinettist till 1991 going on to work sessions and he still performs with a band called The Stars Of British Jazz. They probably don’t play any of the songs on this album but Mike can be justifiably proud of his contribution to the British soul scene.