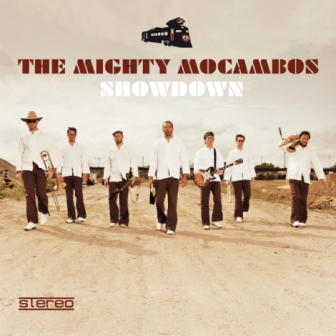 The Mighty Mocambos are a hard-gigging funk septet and ‘Showdown’ is their third full LP though they have many more recordings under their belt – either working as a backing band or using a not too hard to spot alias. In whatever guise you come across Mocambo music you’ll hear driving old school, brassy funk – usually recorded in analogue and delivering an organic, energized sound.

The 11 tracks of ‘Showdown’ fit that template perfectly. The majority of the tunes on offer here are sparse, riff-based funk instrumentals like ‘Locked And Loaded’ but to add some variety to what can be a limiting genre the band are also prepared to innovate. For instance the opener, ‘Road To Earth’ begins as a funk workout but soon develops a haunting quality as guest pianist Peter Thomas (a noted German film composer) adds subtle keyboards shadings. There’s a whiff of the cinema too about the album’s title track, ‘The Showdown’. I don’t really know why but it reminds me of spaghetti western music! Then there’s ‘Drifting Stars’, which is surprisingly mellow.

The big tunes on the album though are the ones featuring a vocalist and the best straight soul cut of that bunch is ‘In The Dark’. It’s another loose-limbed funky groove but young singer Nichola Richards offers a rather sweet vocal – not the usual femme funk rasp; the juxtaposition works.

The set piece items, however, are the trio of cuts featuring the album’s big name guest, Afrika Bamabaataa. Of those the one that grabs the attention is the discofied hip-hop of ‘It’s The Music’ on which AB is aided and abetted by Charlie Funk, Hektek and Deejay Snoop. Little wonder the track’s been championed by Craig Charles. Proper old school – like the rest of the album