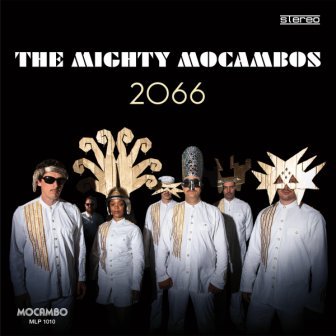 The Mighty Mocambos are a hard-gigging, Germany-based funk septet (at the last count anyway) who for some time have been going out under the alias “the Bacao Rhythm and Steelband”. Now the core players return as the Mocambos (yes still “Mighty”) to offer what they’ve always offered…. hard driving, old school, brassy funk – recorded in analogue and delivering an organic, energized sound. Hear that sound at its most typically “mocambo” on the opening ‘Preaching To The Choir’ – a relentless, 21st century take on instrumental funk. Then, maybe to show exactly where they’re coming from, try ‘Here We Go’. Here the tight sparseness is obvious homage to someone called James Brown… however, on this one we have a kiddie chorus… something the Godfather never ever tried. Odd, but it kind of works!

Highlights of previous Mocambo albums have always been the vocal spots and here there are some fine examples. Obvious standout is the bluesy, Southern soul ballad ‘Where Do We Go From Here’ and to help them deliver, the band have brought in a real soul heavyweight… Mr Lee Fields. ‘Today’ is another searing soul ballad – sparse and haunting with (I think) Nichola Roberts at the mic. Long-time collaborator Gizelle Smith fronts the perky ‘Take On The World’ while for something slightly different there’s some old school rapping from Ice T on ‘Bounce That Ass’ – the song title says it all!