THE METERS: ‘A Message From The Meters’ (Real Gone) 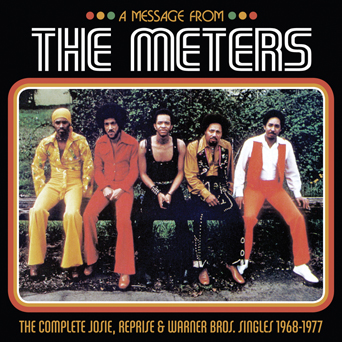 Subtitled ‘The Complete Josie, Reprise & Warner Bros Singles 1968-1977,‘ this superlative 2-CD/40-track retrospective chronicles the life of one of New Orleans greatest soul and funk bands. Originally a quartet comprising drummer Ziggy Modeliste, bassist George Porter Jr, guitarist Leo Nocentelli and keyboardist Art Neville, The Meters started off as the Crescent City’s answer to Memphis’ Booker T & The MG’s before discovering their own sound. Boasting lean, syncopated grooves featuring interlocking  guitar and organ riffs, their forte was catchy R&B instrumentals. For the New York Josie label (a subsidiary of Jubilee Records)  where this compilation’s story begins,  they notched up ten US R&B hits between 1969 and 1971. Their biggest was the brilliant ‘Cissy Strut,’ closely followed by ‘Sophisticated Cissy,’ ‘Look-Ka Py Py,’ and ‘Chicken Strut.’  Those four memorable R&B hits are featured here along with their flipsides and a slew of other Josie 45s which fill up the first disc in this collection.

The second disc begins with the group’s eight singles and their B-sides for Reprise (all produced by Allen Toussaint and Marshall Sehorn), a label they stayed with between 1972 and 1976. They didn’t enjoy as much success with Reprise, and could only muster three US R&B hits – the biggest being the strutting, brassy vocal cut, ‘Hey Pocky A-Way’ in 1974. Though some of their singles undoubtedly fell on deaf ears, this collection shows that the band were consistently creative during this period and hadn’t forgotten how to make the musical equivalent of a piquant Crescent City Filly gumbo. By this time, Cyril Neville had joined on vocals and percussion, helping to expand the band’s tonal palette. Highlights from their Reprise stint include the infectious ‘Cabbage Alley,’  the mesmeric ‘Africa’ and the super-funky ‘Chug-Chug-Chug-A-Lug.’ Interestingly, the group’s final Reprise hit in the States, the high-energy ‘Disco Is The Thing Today,’ finds them chasing the mirrorball dance floor dollar. In 1977, The Meters joined Warner Bros. It was a short-lived liaison, yielding a solitary single, ‘Be My Lady,’ a mid-tempo romantic ballad with jazzy nuances fronted by Cyril Neville’s plaintive voice. Its B-side, the uptempo ‘No More Okey Doke,’ brings down the curtain on this collection, concluding what is a fine singles-oriented overview of a band whose distinctive brand of Crescent City soul and funk music has too often been overlooked and under-appreciated.