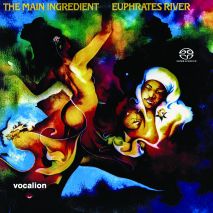 Harlem’s accomplished harmony group, The Main Ingredient, never scored a number one record in their long career but they got mighty close in 1972 with the memorable single, ‘Everybody Plays The Fool,’ which spent three weeks at #2 in the US R&B charts. Though noted for the consistency of their material and performances, the trio had to wait another two years before they were back in the R&B Top 10 with the Bobby Eli-Vinnie Barrett classic, ‘Just Don’t Want To Be Lonely,’ which is one of several spectacular moments on their sixth album, 1974’s ‘Euphrates River,’ a classic but frequently overlooked set which has just been remastered via UK reissue label, Vocalion.

Originally comprising Donald McPherson, Luther Simmons and Tony Silvester, The Main Ingredient debuted in 1970 with the single ‘You’ve Been My Inspiration’ and quickly blueprinted a distinctive vocal style where they blended tasteful covers with self-penned songs. McPherson’s tragic death in 1971 from leukaemia almost derailed the group but his replacement, Cuba Gooding (father of the Hollywood movie star, Cuba Gooding Jr), proved a valuable asset and fronted the trio’s biggest hits. His husky tones can be heard fronting the second Stateside hit from ‘Euphrates River,’ a wonderful widescreen remake of British R&B organist Brian Augur’s ‘Happiness Is Just Around The Bend,’ which is an epic, cinematic groove garnished with dancing strings superbly arranged by arranger, Bert De Coteaux.

Other highlights on this varied includes mellow remakes of two songs by soft-rock duo, Seals & Crofts – ‘Euphrates’ and ‘Summer Breeze’ (which also received a famous R&B makeover by the Isley Brothers in ’73) – and offers fresh perspectives on tunes by Ashford & Simpson (‘Have You Ever Tried It’), Willie Hutch (the excellent ‘California My Way’), and Stevie Wonder (‘Don’t You Worry ‘Bout A Thing’). The album demonstrates not only The Main Ingredient’s sublime vocals and consummate musicality but also how reveals how good they were at taking songs from a variety of sources and remaking them in their own image. Every serious soul music collector should own this classic album and if it’s not in your collection, I urge you to snap it up right away (this reissue, by the way, is a Super Audio CD – featuring the original quadraphonic mix – but it’s compatible with standard CD players).