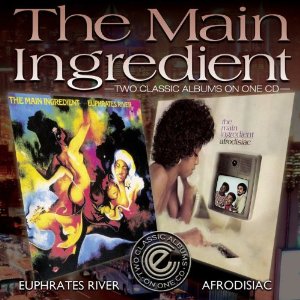 Harlem harmony trio The Main Ingredient bounced back from tragedy at the start of the ’70s (when original lead singer, Donald McPherson, died from leukaemia) to become one of the most popular black vocal groups of that decade. McPherson’s replacement was husky-voiced Cuba Gooding (whose son, incidentally, is Cuba Gooding Jr, the Hollywood actor). With Gooding in the fold, the trio (who began as doo-wop outfit The Poets in the ’50s) hit the big time with the classic ballad, ‘Everybody Plays The Fool,’ in 1972 and from there continued to make some great records until they ran out of gas in the late ’70s (though they reformed at different junctures in subsequent decades and are still going strong today). The trio cut some terrific LPs too and the best are arguably the pair that comprises this splendid Expansion twofer – ’73’s ‘Afrodisiac‘ and ’74’s ‘Euphrates River,’ both first issued by RCA.

‘Euphrates River,’ the more commercially successful of the two albums, is the lead off set on the CD and it’s packed with great performances and superb material. The group’s transfiguration of Brian Auger’s ‘Happiness Is Just Around The Bend’ into an epic soul-infused dance floor groove is simply incredible and to this writer’s ears stands out as the trio’s crowning achievement. It was a smash hit single in the USA, but not as big as their marvellous remake of Ronnie Dyson’s Philly soul classic, ‘Just Don’t Want To Be Lonely,’ which also charted in the UK. Listen out, too, for a great rendering of Willie Hutch’s ‘California My Way.’ It shouldn’t be forgotten that a key figure in the group’s success was ace producer, Bert DeCoteaux, whose arrangements – especially his use of strings – are absolutely sensational.

’73’s ‘Afrodisiac‘ also benefitted from DeCoteaux’s input and is mainly devoted to the music of Stevie Wonder (six of its ten cuts are Wonder originals). The group put their own mellow and blissed-out spin on ‘Superwoman,’ deliver a gorgeously sensual ‘Girl Blue,’ and bring some wonderful vocal touches to ‘Where Were You When I Needed You,’ and a particularly lovely laid back version of ‘Something ‘Bout Love,’ plus ‘I Am Yours,’ and ‘Something Lovely.’ As well as the Wonder material, the group show a more muscular side on a fairly strident – but stylish, nevertheless – rendering of the Isley Brothers’ funkafied ‘Work To Do.’ Appended to both albums is a bonus cut in the shape of 1975’s glorious mid-paced ballad, ‘Let Me Prove My Love To You,’ the kilelr cut from their ‘Shame On The World’ LP (which is also available on a different Expansion Main Ingredient twofer).

Two great albums, then, from one of soul music’s classiest vocal groups and for serious collectors of ’70s soul this is a must-have reissue.