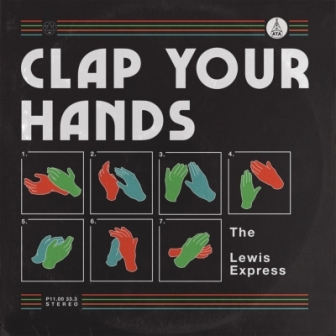 The Lewis Express first steamed into our consciousness last year with a lovely, eponymous soul jazz album that recreated (with a 21st century twist) the piano led jazz of people like Ramsey Lewis, Young-Holt, and Ray Bryant. We learned that the band were made up of George Cooper, Piano; Neil Innes, Bass; Sam Hobbs, Drums; and Pete Williams, Percussion and that they’d started off as the studio band for Leeds-based ATA Records. ATA, by the way, stands for “All Things Analogue” – so that should give you a clue as to where they’re all coming from.

Last month we were delighted to learn that a new album was on the way – signalled by the single ‘Clap Your Hands’/’Stomp Your Feet’. The former is a Ramsey Lewis ”Hang On Sloopy’ kind of thing while the latter is ultra mod dance floor friendly – perfect for those who like to boogaloo!

The new album – named for ‘Clap Your Hands’ – has just been released and both ‘Clap Your Hands’ and ‘Stomp Your Feet’ are featured. The remaining six tunes offer more of the same carefully crafted soul jazz – plenty more to boogaloo and/or walk the dog to (we’re bopping to ‘Flat Palm Avenue’ right now. If, on the other hand your dancing shoes are more of the Latin variety you can opt for the irresistible ‘Danca De Duas Maos’ or the even more exotic ‘Moola Umemo’…. great stuff!

All eight tunes are band originated and just maybe it would have been interesting if they could have tried their hand at a big soul cover – in the way that Ramsey Lewis always did…. maybe next time? In the meantime, climb aboard the Lewis Express time machine and enjoy the trip back to mingle with the in crowd at the Bohemian Caverns!