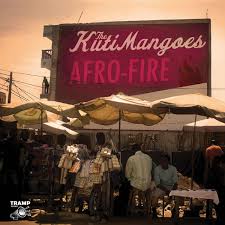 The oddly named Kuti Mangoes are a mixed race sextet operating out of Germany. Their music – led by Michael Blicher’s baritone sax – is a swinging mix of jazz and afro beat, typified by the album’s big opener, ‘Fire’. It’s totally infectious and enhanced by shouts, scat and chants from Burkina Faso vocalist Patrick Kabre. There’s also a crazy trombone that has the magical timbre of the late Wayne Henderson. I defy you to keep your feet still. The tune is offered again at the end in a remix version which if anything is even more of a foot tapper. There’s more heat for thee feet on ‘Something Yellow’ and the flute-led ‘Song For Fela’.

‘Feeling Good’ is a great jazz groove too – but a whole lot cooler while ‘Pass It On’ is the set’s catchiest moment, featuring an insidious little brass fill. Another highlight is a funky cover of Charles Mingus’ ‘Moanin’ and if you’re looking for a 60’s style jazz ballad try ‘Slowly’… totally captivating.

Throughout, it’s hard to accept that the Kuti Mangoes are a six piece. Their music is so big, bold and bright you’d be forgiven for thinking that there was full afro-orchestra in the studio. If afro-centric jazz does it for you, the Mangoes deserve checking out. Do so @ www.tramprecords.com