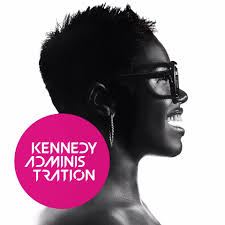 For the past several months the European soul world has been in thrall to an insidious Latin shuffle of a tune from a new, New York-based band, Kennedy Administration. Tune in question is ‘Don’t Forget To Smile’ and research reveals that the band is built round a gorgeous female vocalist who just wants to be known as “Kennedy” and said tune is the lead single from the band’s eponymous debut long player.

Commentators have compared ‘Don’t Forget To Smile’ with Stevie Wonder. Not only is it, like the best of Stevie’s output, a wonderfully catchy melody with a jazzy undertow delivered with tuneful conviction, it also boasts plenty of Wonder-esque harmonica (courtesy of band member Gregoire Maret).

Now the good news is that the 10 track long player offers plenty more of the same. The beaty opener. ‘It’s Over Now’ is a good example. It’s a tough, tight old tune that is the more remarkable when you think that this is, in fact, the band’s debut album!

Right now, we’re also enjoying the breathy ballad ‘Finally’ while those who like to cut the odd rug or two will enjoy ‘Let’s Party’ –the title says it al!

The long player also boasts two covers of classic soul cuts…. a measure of the band’s confidence! First up there’s a take on Billy Preston’s’ ‘Will It Go Round In Circles’ – this new version isn’t a million miles away from the original though there’s lashings of lovely gospel conviction too. The second cover is much more ambitious … and brave…. Al Green’s classic ‘Let’s Stay Together’. This is what I call a worthy cover – i.e. very different to the original! Here after a slow tortured opening, the band and Ms K open up, take wings and fly – injecting jazzy licks and rock garnishing to the familiar soul credo! Purists probably won’t like it – but hey… applaud the bravery!