THE JONES GIRLS; Coming Back (Expansion) 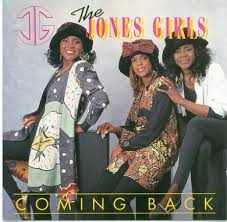 The Jones Girls are synonymous with Philly soul. Their Philadelphia International hits – like ‘Nights Over Egypt’, ‘You Gonna Make Me Love Somebody Else’ and ‘At Peace With Woman’ made them favourites with soul fans the world over. It was in the UK, though, that Shirley, Brenda and Valorie became especial soul heroines and when the sisters pitched up in London for a sell-out show in 1992 they found it hard to believe how well-known and respected they were amongst the UK soul crowd. Little wonder then that they readily accepted the offer to cut an album for London’s ARP Records… and it’s that now-collectable 10 tracker, ‘Coming Back’, that’s just won reissue via Expansion Records.

For the long player, label bosses brought in the cream of the UK soul mafia to write and produce the songs. The album credits read like a who’s’ who of 90s UK soul… Errol Henry, Wayne Lawes of Kreuz, Steve Carmichael (then hot with the Affair) and Jazzie B all worked on the set and despite that variety ‘Coming Back’ is a remarkably unified album. Why? Well, those UK soul cats – though coming from different backgrounds – had all developed a similar sounding musical atmosphere with their work and, maybe more importantly, they respected the Jones Girls; they knew what they could do and trusted them to deliver… and how the sisters delivered. Shirley’s leads are tremendous… as soulful as anything she recorded in the City Of Brotherly Love while Bren and Val’s harmonies are superb throughout – that smooth, instinctive harmony which sibling-based groups make so effortlessly.

Soulful highlight is ‘Getting On With My Own Life’. It’s a smouldering mid-tempo groove with a great hook; it proves that the Jones Girls were serious contenders in the soul stakes. The punchier ‘You Threw Our Love Away’ – the album’s lead single – runs it a close second. This one’s a crisp dancer with some lovely vocal interplay. The album boasts plenty of ballads too… notably the Keni Burke penned ‘When A Woman’s In Love’ and the breathy ‘Sweet Ecstasy’. Most experimental cut on the LP is the Jazzie B-helmed ‘Free’. Mr Beresford, as we know, always loved to try out new things and here he crafts an intriguing beat pattern, adds a sweet piano riff and floats those lovely Jones harmonies on top. Great stuff… like everything on offer, actually. Even the in-your-face opener (the title cut) has its charms and for those conservative soul folk who might baulk at the rapping, Expansion add the non rap version as one of 6 bonus tracks…. you also get a couple of remixes of that lovely ‘You Threw Our Love Away’ and a ragga tweak of ‘Sweet Ecstasy’ – very, very different to the LP version but with its own particular charm.