THE JAMES HUNTER SIX: Whatever It Takes (Daptone) 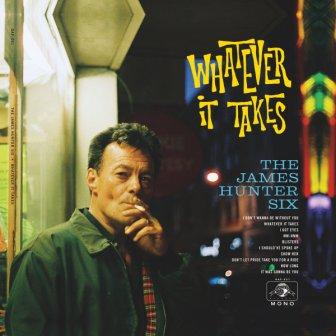 For an ex-railway worker Neil Huntsman’s not done too badly for himself. A colleague on the railway turned a young Neil onto blues and soul; then mastering the guitar and with a trio in tow, the newly dubbed Howlin’ Wilf and the Vee Jays hit the London circuit. A further name change to James Hunter, gigs with Van Morrison and a series of superbly crafted LPs that melded 60s soul sensitivities with a contemporary indie vibe turned the ex-signal man into a cult figure. (Oh, and we’ve forgotten to mention his GRAMMY nomination). Quietly pleased to be known as UK soul’s best kept secret, James Hunter enjoyed the devotion of a coterie of fans who embraced his quirky and quite unique take on classic soul.

Last January though, the landscape began to change. Signed to the legendary Daptone label, James’ ‘Hold On’ album was a huge success and brought our man to a much wider audience – his profile boosted by glowing praise from outlets as diverse as Mojo, Rolling Stone and The Wall Street Journal.

James’ upward and onward trajectory is set to continue as he releases the official follow-up to ‘Hold On’. The new collection, ‘Whatever It Takes’, is out in February and it continues Hunter’s liaison with Daptone and its enthusiastic head honcho, Bosco Mann.

Musically, ‘Whatever It Takes’ is the logical extension to ‘Hold On’. The set’s first single set out the stall. ‘I Don’t Wanna Be Without You’ is typically Hunter; typically Daptone…. lazy, laconic, sweet and soulful. We’re told that the song was inspired by Mrs Hunter and indeed she’s the muse behind much else of what’s on offer. The ultra domestically content Mr H has put together a collection that speaks of true love and loyalty rather than the staple R&B/soul stories of lust, shallow seduction and cheating in the next room.

Highlights? Well every one of the ten cuts has considerable merit; all delivered with passion from a man and band – Damian Hand (tenor saxophone) Lee Badau (baritone saxophone) Jonathan Lee (drums) Jason Wilson (bass) and Andy Kingslow (keyboards, percussion)- who clearly relish what they’re doing. Try ‘Show Her’ to hear what I mean…. redolent of early Motown (think ‘You Beat Me To The Punch’), it’s a joy in this digitally airbrushed musical era. And we could say the same for the other 9 cuts –even the driving instrumental that is ‘Blisters’.

‘Whatever It Takes’ is released on Daptone Records on February 2nd and it’s shaping up to be one of 2017’s first BIG albums.