THE HAGGIS HORNS: Stand Up For Love (Haggis Records) 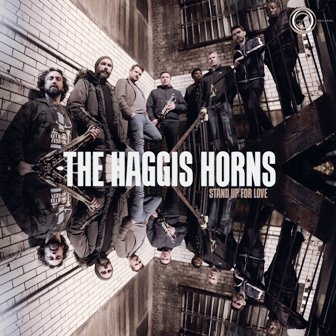 Despite their Scottish flavoured name, the Haggis Horns originated up there in deepest, darkest Yorkshire… Leeds to be precise! That was way back in 1999 and since then they’ve won a reputation as one of the best live soul bands around. Their CV will tell you they have toured with people like Jamiroquai, John Legend & The Roots, Amy Winehouse, Corinne Bailey Rae, Take That, Mark Ronson and Elbow. On record they’ve released four long players – peddling a sound that mixes the flavours of people like Donald Byrd, The Mizells, EWF, The Fatback Band, Fred Wesley, The Meters, Sly Stone and, their original inspiration, The Average White Band. Quite a cocktail – back at its tastiest on their latest album, ‘Stand Up For Love’ which has just been released on their own label.

Interestingly, having listed all those influences, the album’s title track, ‘Stand Up For Love’, eschews hard funk for a reggae flavour – the first reggae track the band have cut since their recording debut in 2007. The tune’s fronted by vocalist John McCallum and he’s at the mic for half a dozen more tracks including the crunching , AWB-flavoured, funk opener ‘Don’t Give A Damn’ which kind of sums up the band’s attitude; they don’t give a damn about prevailing fads and fashions; they do it their own funky way; like it or lump it! The mellowest tune on offer, by the way, is the album closer, ‘Give It Up’. McCallum takes lead again but it’s hardly quiet storm; think mellow moment Tower of Power.

On the two instrumentals, ‘Burning’ and ‘Haggis Express’ the band really do take flight, proving you’d be hard pressed to find a tighter, tougher  brass section in modern soul and funk. The album’s out now.