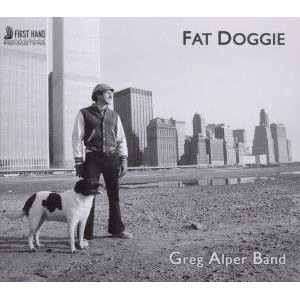 Greg Alper hails from Chicago where as a teenager he nursed ambitions to become a rock guitarist. When he was 18, however, he had one of those rare Road to Damascus moments . After listening to John Coltrane’s ‘A Love Supreme’ he was a changed man; there and then he resolved to become a jazz saxophonist and he duly ditched his science studies at the University of Pennsylvania and, in 1978, he headed to New York to “become part of the jazz scene”. There he formed a band, scored plenty of gigs and even won a recording contract with Adelphi Records. The result was the 1978 long player, ‘Fat Doggie’ which despite great reviews at the time did little commercially – possibly ‘cos the band disintegrated soon after its release. Since then, however, ‘Fat Doggie’ has become a real collectors’ item fetching big money amongst groove spotters and jazz-funk disciples. Now, First Hand Records have brought it to re-mastered CD for the first time and for a modest outlay we can all hear what the ‘Fat Doggie’ fuss was all about.

For starters we need to say that the music on ‘Fat Doggie’ is like no other. It’s jazz – sure, but it’s also infused with funk, pop, rock, soul and – in places – disco flavours. Alper admits that the feel of the album was inspired by a range of artists – amongst them, Duke Ellington, Charlie Mingus, James Brown, Frank Zappa and Don Ellis – whose unusual meters are evident on a number of cuts. When it all comes together it works well – witness the two openers ‘Hole In Your Pocket’ and ‘Fat Doggie’ itself. The former runs on pacey disco beats and features a gruff vocal from Ray Anderson and some soaring brass; the latter is an Average White Band funk workout with gimmicky dog sound that Zappa would have been proud of. ‘Give It Up’ is big and funky too. Elsewhere there’s some pleasing Latin moments – notably ‘Many Moods’ (this is a bonus cut, not on the original LP), ”Huevos Nuevos’ and the John Klemmer-ish ‘Don’t Ever Let Me Catch You’. Other cuts are maybe more esoteric and beg the question what the band might have gone to achieve together. As it was, individuals like Ray Anderson, Chuck Loeb, Ritchie Oppenheim and Steve Gutman went on to higher profile bands while Alper made a name for himself scoring movies. The CD’s sleeve notes (courtesy of SJF’s Charles Waring) tell the full story but the music of ‘Fat Doggie’ speaks for itself.