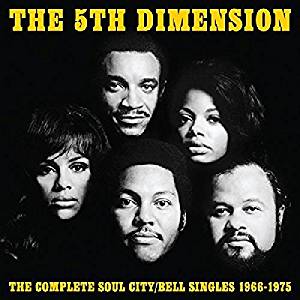 The wonderful FIFTH DIMENSION are not everybody’s cup of soul tea but their blend of committed lead vocals, sweet, on-point harmonies, polished production (usually courtesy of Bones Howe) and a canny knack of spotting great songs has won them legions of fans and kept the band in business for fifty years. To celebrate that auspicious anniversary, re-issue specialist Real Gone Music, have just released this three CD set that brings together all group’s singles recorded for the Soul City and Bell labels.

The Fifth Dimension’s genesis, however, goes back further than fifty years. Indeed it was back in 1962 that photographer Lamonte McLemore and “Miss Bronze California”, Marilyn McCoo, formed a vocal duo called the Hi-Fis. In ’63, McLemore was assigned to photograph that year’s Miss Bronze California pageant which was won by Florence LaRue. Struck by her looks (and those of his singing partner) he had the idea to invite her into the group and then to expand the band with two friends, Billy Davis and Ron Townson. Now dubbed The Versatiles, they failed an audition for Motown but landed a deal with Bronco for whom they recorded one single. They then caught the attention of singer Johnny Rivers who signed them to his Soul City label. Rivers had them record two Willie Hutch songs for their first single. It meant little so Rivers suggested a name change; then as “the Fifth Dimension” they enjoyed moderate chart success with their next two singles, ‘Go Where You Wanna Go’ and ‘Another Day Another Heartbreak’. The big break through, though, came in 1967 with their evergreen version of Jimmy Webb’s ‘Up Up And Away’. This classic slice of “Sunshine Soul” made the Fifth Dimension household names and the hits continued to flow. There were more Webb songs of course but some of the Fifth’s most cherished recordings were penned by Laura Nyro. Things like ‘Stoned Soul Picnic’, ‘Wedding Bell Blues’ and ‘Sweet Blindness’ remain smooth soul classics.

All those wonderful songs are, of course, included here but they’re not the only gems. Soul connoisseurs revere the Fifth Dimension’s version of ‘Working On A Groovy Thing’ and surely their treatment of Bacharach/ David’s ‘One Less Bell To Answer’ is that song’s definitive version?

This collection also includes the two singles they recorded as The Versatiles as well as their only Arista single… 1975’s ‘No Love In The Room’/’I Don’t Know How To Look For Love’. So, over 61 songs (all the A and B sides) you can trace the evolution of a very special soul sound…. a sound that’s optimistic and always uplifting… “champagne soul” as one critic christened it!

Original member Florence LaRue still tours with an incarnation of the Fifth Dimension (Marilyn McCoo and Billy Davis left in ’75 for a successful career as a duo; Ron Townson died in 2001 and health reasons forced Lamonte McLemore to retire in 2006). You can bet that when Florence and her new partners perform, that sparkling, gorgeous “champagne” still flows.