THE FANTASTICS; All The People (Freestyle Records) 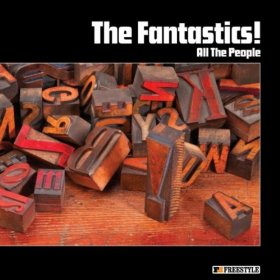 The Fantastics are a London-based band who came into being in 2003 when organ grinder Greg Boraman left the Soul Destroyers to join the Soul Saviours. Soon, the Saviours – with a new-found confidence – became the Fantastics and they were soon winning plaudits from critics and gig-goers alike. Their 2009 album ‘Mighty Righteous’ was played to death by Mark Lamar and Craig Charles and both those taste making DJs will be delighted with this new 11 tracker since it serves up lots more of the same – but with the bonus of three big vocals courtesy of Sulene Fleming.

Though the augmented five piece say they’re not comfortable being pigeon-holed into a genre, their sound is essentially the sound of classic soul-jazz. They nail their colours to that particular mast by choosing to cover Ivan Booglaoo Jones’ ‘Sweetback’…. and what a reverential job they make of it – just the right amount of “cool”. There’s plenty more of the same on the remaining self-penned instrumentals like ‘Mushroom Strut’ and the LP’s title cut. On them and throughout you’ll hear subtle flavours of Herbie Mann, Dave Pike, Grant Green, Jimmy McGriff and more.

The three previously mentioned vocals add counterpoint to the mix and in Ms Fleming (who’s worked for a number of labels) the Fantastics have found a treasure with a surprisingly soulful range. Her ‘Cold Case’ is a sultry, swamp rock kind of thing while on the less-focused ‘I Breathe’ she proves she can “do rock”. The highlight though is the beautiful ‘Somewhere Finally’. It’s a gorgeous mid-tempo summer groove built around a hugely infectious horn riff. Sulene nails it beautifully – never allowing it become too sweet or sentimental. It would be a high spot on any modern soul set – yes even those coming from the genre’s spiritual home. It should be checked out …and you can do just that @ www.freestylerecords.co.uk