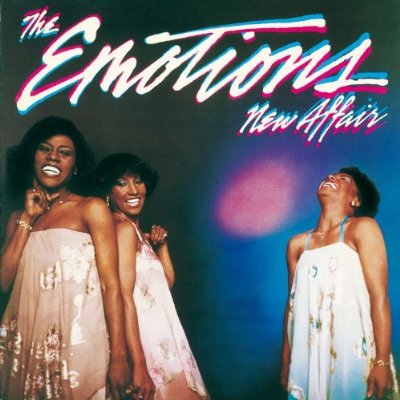 Although distaff vocal trio The Emotions recorded noteworthy albums for indie set up, Red Label, and even Motown in the 1980s, undoubtedly the best long player they produced in that decade was 1981’s ‘New Affair,’ their final offering for Columbia. Never before available on CD, it’s been put back in circulation by the people at Holland’s Vinyl Masterpiece.

The Emotions’ career began many years before in church in their native Chicago where they were known as the Hutchinson Sunbeams and became renowned for their sweet, soulful, cotton-candy harmonies. After a couple of secular 45s for local indie labels in the late ’60s, the girls (Sheila, Wanda and Jeanette Hutchinson) came to the attention of Stax Records, who signed them in 1969. They scored a massive hit for the Memphis label in the shape of the stateside R&B chart topper ‘So I Can Love You’ before joining Columbia Records in 1976 where under the aegis of their mentor, Earth Wind & Fire’s main man, Maurice White, they morphed into a disco-soul act and scored a monster crossover smash with ‘Best Of My Love.’

White helmed the girls’ first four albums for Columbia (1976’s ‘Flowers,’ ’77’s ‘Rejoice,’ ’78’s ‘Sunbeam,’ and ’79’s ‘Come Into Our World’) but took more of a backseat on ‘New Affair,’ which he executively produced and co-wrote a couple of songs for. Even so, he had a hands-on role as the producer of one track – and arguably the album’s best cut – ‘They’ll Never Be Another Moment,’ a slinky dance floor cut propelled by Keni Burke’s slapped bass. Also, the rest of the production of the album was entrusted to one of White’s protégés, Billy Meyers, who does a fine job and uses many of the musicians that had appeared on previous albums by The Emotions (Wayne Vaughn, Freddie Washington, Marlow Henderson, Roland Bautista and horn men Jerry Hey and Don Myrick). Material-wise, ‘New Affair’ was stronger than The Emotions’ previous two albums (‘Sunbeam’ and ‘Come Into Our World’) and features great uptempo cuts like ‘Love Lies’ – a thrilling post-disco dancer boasting punchy horns and string orchestra flourishes – ‘Turn It Out,’ ‘All Night, Alright’ and the lovely closer, ‘When You Gonna Wake Up’ where the girls’ slick, soulful harmonies are underpinned by a mesmeric, reggae-infused groove. Though it doesn’t quite reach the heights of the girls’ magnum opus, ‘Rejoice,’ ‘New Affair’ is a great little album so it’s pleasing to see it back in print.