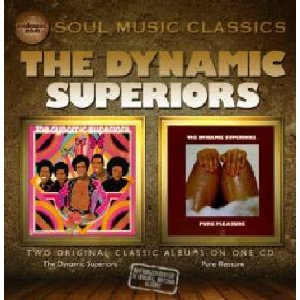 The Dynamic Superiors were a Washington DC group who, in the 70s, worked for Motown – cutting four albums for the Gordy set up. The five piece were brought to Motown by their mentor Guy Draper (also manager of the Unifics and sometime collaborator with Leroy Hutson and Donny Hathaway) and, through a Draper working relationship with Motown exec Ewart Abner, it was agreed that Ashford and Simpson would produce the band. Between 1975 and 1977, the Dynamic Superiors and Ashford/Simpson crafted a classy catalogue of sweet, symphonic soul punctuated with snappy disco dancers. Since then , the band have been sadly neglected, so this timely reissue of the Superiors’ first two LPs will allow soul fans of varying vintages to either enjoy the music for the first time or reassess their impact.

The band’s debut eponymous album spawned their biggest hit – the wonderful ‘Shoe Shoe Shine’. Those who know it will surely agree that it’s one of Ashford and Simpson’s best songs… certainly one of their most mature and a perfect vehicle for the magnificent falsetto of lead singer Tony Washington. Other goodies on the set include the snappy ‘One-Nighter’ and the melodic ‘Release Me’. ‘Shoe Shoe Shine ‘ was rightly a 1975 hit and the LP sold well enough for Motown to rush release a second collection in June of that year. Listening you’ll hear that ‘Pure Pleasure’ was a more adventurous album altogether (even the cover art work sparked a deal of controversy). It also contained more up tempo numbers than the debut – like the breakneck ‘Face The Music’ and the opening ‘Deception’. However, they’re only average disco fare while there isn’t a ballad to match the beauty of ‘Shoe Shoe Shine’. You also get a contrived take on ‘Ain’t Nothing Like The Real Thing’ on which the complex arrangement only serves to underline the honest beauty of the original Gaye/Terrell version. That said, it’s great to have both albums readily available again and it’s clear that in lead singer Tony Washington the band had an iconic front man. He was one of the first openly gay singers and was an obvious influence on people like Sylvester. Indeed in his sleeve notes, David Nathan makes a lot of Washington’s sexuality and maybe his pioneering honesty is the measure of the band’s importance; but, of course, it’s what’s in the grooves that creates the legacy and ‘Shoe Shoe Shine’ is still a wonderful piece of work.