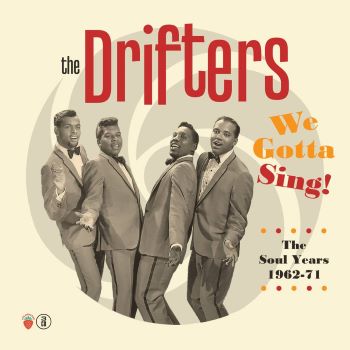 The Drifters are a soul institution. Indeed they were right there are the inception of the genre. Their 1958 hit ‘There Goes My Baby’ is regularly cited as the first harmony group recording to break away from the doo-wop tradition. With its use of strings, Brazilian rhythms, an elaborate production and a passionate vocal (Ben E King), critics were quick to call it “soul music”. An institution indeed! However, the Drifters are more a “brand” than a “band”. Over the years various groups of Drifters have featured over 70 members while the identity situation is complicated by the fact that the name “Drifters” is owned by the Treadwell family (their first manager was the infamous George Treadwell) who regularly fire whole line-ups and hire new members as the whim takes them. More complications? Well there are two bands called “The Drifters” in the vocal group Hall Of Fame while at any given time there can be any number of different “Drifters” touring the world! All that, of course, doesn’t make the music of the Drifters any less significant  and there are any number of Drifters’ compilations out there on the sales racks highlighting all that significant music!

Enter Cherry Red imprint, Strawberry with a new look at the Drifters and their ‘We Gotta Sing’ is a little different to the other Drifters’ collections. This 3 CD, 76 retrospective focuses on the years 1962 – 1971 when the group were pacted to Atlantic Records. It begins with 1963’s ‘Another Night With The Boys’  and ends with the group’s version of Arthur Alexander’s ‘You Better Move On’. In between you can enjoy plenty of the Drifters’ biggest hits  – things like ‘Up On The Roof’ and ‘On Broadway’. Hits like when ‘ My Little Girls Is Smiling’ and the seminal ‘There Goes My Baby’ are absent – they precede this album’s time gate. There is though a crude live version of ‘There Goes My Baby’.

Drifters’ fans will be pleased to have the Drifters’ Christmas recordings on CD while, though not to every soul collectors’ taste, this set also offers the whole of the group’s 1965 album, ‘The Good Life’ on which the band deliver their versions of MOR standards like ‘On The Street Where You Live’ and ‘Desafinado’. The Drifters weren’t alone in doing this. You’ll remember that The Temptations, the Impressions, the Four Tops and more also recorded albums in the same vein in an attempt to win wider acceptance!

This collection’s USP though is the inclusion of two tracks which the label says have never been issued before – a cover of the O’Jays’ ‘I Dig Your Act’ and a version of the Freddie North hit ‘You And Me Together Forever’ produced by Swamp Dogg/Jerry Williams.

Bob Fisher’s excellent sleeve notes manfully thread their way through the Drifters’ complex history and offer wonderful tribute to (like we said) a real soul institution!