THE DRAMATICS; Whatcha See Is Whatcha Get (Stax) 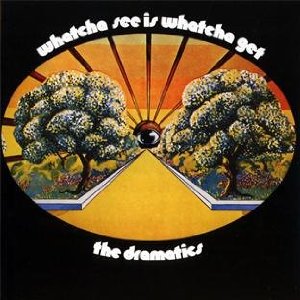 The Dramatics hailed from Detroit where they began life as The Sensations. They recorded for Wingate and Sport before producer Don Davis signed them to Groovesville. In 1967 he took the band to Stax where Al Bell was seeking to expand and diversify the label’s profile. Their first effort for Stax (‘Your Love Was Strange’) failed and Davis seemed to lose interest till songwriter Tony Hester came on board. Between them they crafted the magnificent ‘Whatcha See Is Whatcha Get’ on which the various band members (William ‘Wee Gee’ Howard, Larry ‘Squirrel’ Demps, Willie Ford, Ron Banks and Elbert Wilkins) traded vocals. Claves, congas and a fuzzed lead guitar drove the sweet Latin rhythms and, sweetened with strings and horns, it was little wonder that the song became a smash. It was (indeed, still is) irresistible. More hits followed – notably ‘Get Up And Get Down’ and the iconic ‘In The Rain’ and in 1972 Stax/Volt cobbled together an album on the band named after their breakthrough.

The 8 tracker (which contained the hits and five new Hester songs) has been reissued many times before, but this new manifestation is different in that it offers ten bonus selections –nine of which are again from the pen of Tony Hester. They include the beautiful ballads ‘Hey You Get Off My Mountain’ and ‘Fell For You’ along with 70s timepieces like ‘The Devil Is Dope’ and ‘Beware The Man (With The Candy In His Hand)’. It’s all great memory-jerking stuff and though the Dramatics recorded prolifically for a number of labels after leaving Stax, nothing ever quite matched what they produced there.

‘Whatcha See Is Whatcha Get’ is released as part of Stax/Concord’s ‘Remasters’ series which also currently offers Rufus Thomas’ ‘Do The Funky Chicken’ and Shirley Brown’s ‘Woman To Woman’.