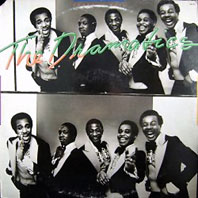 Detroit group The Dramatics had to go to Memphis to make it in the music business, scoring a stack of hits (incuding ‘Whatcha See Is Whatcha Get’ and their 1972 R&B chart-topper ‘In The Rain’) under producer Don Davis at Stax’s Volt imprint in the early ’70s. This reissue of the vocal quintet’s eighth long player catches up with the group in 1977 when they had been at ABC for a couple of years. Though often overlooked – the album makes its debut on CD – ‘Shake It Well’ proves to be a solidly consistent effort that opens with the title track, a slow-burning chunk of bluesy funk that rose to #4 in the US R&B charts. By contrast, the slicker, disco-inflected ‘You Make The Music’ shows that The Dramatics could be sophisticated as well as gritty. And on slow and mid-tempo numbers such as the cosmic ‘Spaced Out Over You,’ the highly-emotive ‘That Heaven Kind Of Feeling,’ and pleading ‘My Ship Won’t Sail Without You,’ they demonstrate how adept they were at delivering expressive ballads. Another seductive slow-jam from the album, ‘Ocean Of Thoughts And Dreams’ – sampled by Destiny’s Child on their 2004 hit ‘Girl’ – was a US R&B Top 20 hit in early 1978 and exemplifies the group’s classic blend of impassioned lead vocals with sumptuous supporting harmonies. As a bonus accompaniment to the music, group member, L.J. Reynolds, contributes his reminiscences of the recording session in the CD’s liner notes, providing a pertinent historical context with which to frame the album.