The Devil Is Dope’ and ‘In The Rain’ 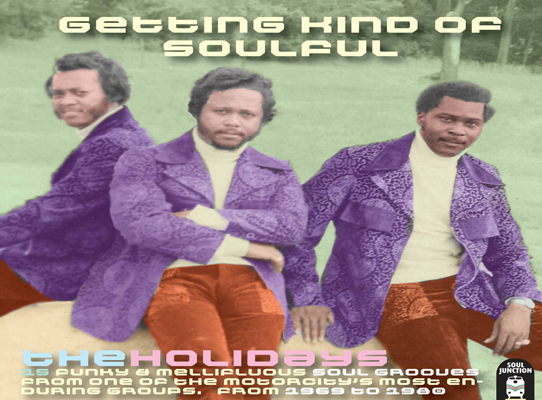 UK collectors’ label Soul Junction is renowned for its catalogue of quality rare groove and archive vinyl 7″ reissues. They don’t often do CD albums, so when they do you can be sure we’re talking quality, in-demand, grown-up soul music and their latest sortie into albums is just that!

Soul Junction’s latest long player focuses on Detroit harmony group, The Holidays. Though to add a little confusion to the mix, The Holidays also recorded as “The New Holidays”, “The Fabulous Holidays” and just ‘Holidays”. More confusion? Well soul anoraks will know that were dozens of soul groups going out as “The Holidays”; so to be specific, the Holidays featured here were Detroit-based and for most of their life span they featured the brothers Jack and James Holland alongside various others (including Joe Billingslea of the Contours). Their biggest claims to fame seem to be the facts that they were the first to record Tony Hester/Don Davis’ ‘The Devil Is Dope’ and ‘In The Rain’ (hits for the Dramatics, of course)and that in 2009 blue-eyed soul man Mayer Hawthorne covered their ‘Maybe So, Maybe No’ on his ‘Strange Arrangement’ album.

Indeed ‘Maybe So, Maybe No’ starts proceedings here. Written by Popcorn Wylie and Tony Hester and released on Wylie’s Soulhawk label in 1969 this is a classic piece of Detroit harmony soul, sweet n’ lovely. The flip side of the single (also featured here) is the busier, lead vocal-switching ‘If I Only Knew’, By the way, if you want to search for the original Soulhawk 45, the group were credited as “The New Holidays”.

The remaining 13 tracks come from the Holidays’ tenure at labels like Marathon, Ron-Hol and Ron Ron. Marathon was the group’s own label and best of the Marathon material are the two sides of the label’s first release. ‘I’m So Glad I Met You’ is a lovely, light dancer while ‘Too Many Times’ is a dramatic ballad. Both songs, by the way, were co-written by sometime Contour, Sylvester Potts.

Though we don’t get the Holidays’ versions of ‘The Devil Is Dope’ and ‘In The Rain’ (tapes lost?) there are plenty more highlights. Amongst ’em are ‘Lazy Days’ (a kind of Dells’ pastiche with spoken intro); ‘This Is Love (A Little Understanding)’ and ‘Getting Kind Of Serious’ – both surprisingly lavishly produced for a small label release. In truth though point your remote at any of the 15 tracks on ‘Getting Kind Of Soulful’ and you’ll enjoy quality, in-demand, grown-up soul music. But haven’t we said that before?