THE DETROIT EMERALDS: Let’s Get Together (Ace/Westbound) 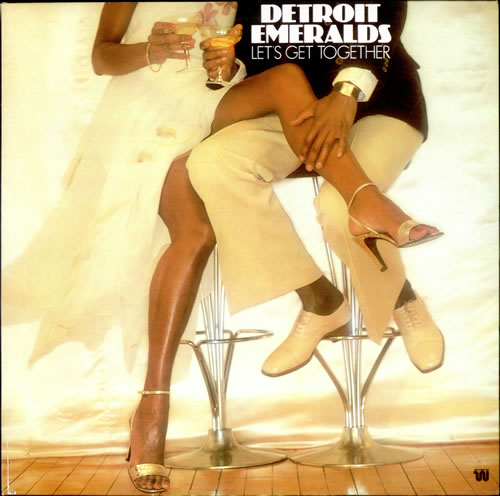 The Detroit Emeralds were never major stars in the USA but for a time in the 70s they were ultra popular in the UK. Catchy, soul-inflected items like ‘Feel The Need’ and ‘I Think Of You’ became radio and dance hall staples and the trio were regular visitors to Britain. In 1973 the group disbanded when founding member Abrim Tilmon left to pursue a solo career. The remaining members – Ivory Tilmon and James Mitchell – joined forces with Carl Johnson and formed a new group called Now. However, when disco started to dominate, Tom Moulton remixes of songs like ‘Feel The Need’ reawakened interest in the Detroit Emeralds and the group were reborn…. Abrim Tilmon rejoining his ex colleagues – but in an executive, non-performing way. To cut a complicated story short, the result was the 1978 long player ‘Let’s Get Together’, recorded for Westbound Records, who owned the copyright to the name “Detroit Emeralds”.

The album’s just been reissued by Ace Records and though it’s not essential it will interest collectors of harmony group soul and anyone who still hankers after the glory days of the glitter ball. Of the album’s 8 tracks, all but one are aimed squarely at the feet but, sadly, none of those dancers are that memorable. Yes, the cuts were recorded with some of the best session men of the day, the Johnny Allen arrangements are clever and James Mitchell, on lead, is in fine soulful form, but nothing really stands out and grabs you – standard disco fare at best. The odd-track-out is the one that has survived best. It’s the sweet ballad ‘Travelling Man’. Boasting a full and lush production, it’s a great example of mid-70s group soul and though recorded in Dearborn, Michigan, it’s garnished generously with Philly flavours.

Sales of the album were disappointing and the Detroit Emeralds once again disbanded and though comebacks were regularly mooted, the premature death of Abe Tilmon in 1982 ended any reunion hopes. ‘Let’s Get Together’ became the Detroit Emeralds’ last album. This is its first ever reissue and it comes with one bonus cut – a full length Tom Moulton remix of ‘I Just Don’t Know What To Do With This Girl Of Mine’.