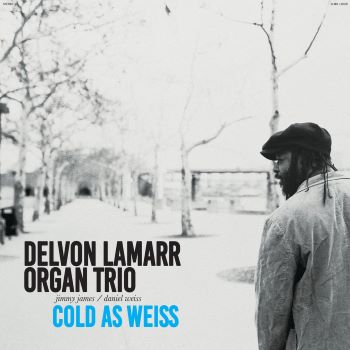 The Delvon Lamarr Organ Trio have been peddling their 21st century take on soul-jazz since  2015. Genre fans lapped up their  version of Marvin Gaye’s ‘Inner City Blues’ while the single  ‘Ain’t It Funky Now’ kind of summed up where they’re coming from. Their February 2021 album ‘I Told You So’ increased their profile and subsequent fan base and this new collection is sure to continue that upward movement.

The trio consists of  organ grinder, Delvon Lamarr, guitarist Jimmy James and drummer Dan Weiss. To further understand where they’re coming from, maybe a word about the trio’s heroes and influences. Lamarr  numbers amongst his heroes Jimmy Smith, Booker T and Baby Face Willette. Guitar man James cites Steve Cropper and Grant Green as key influences while skinsman Weiss once played in soul and funk outfit, the Sextones. So, yes, the threesome are versed in serious soul, soul-jazz and funk. And if you take a peek at the album artwork (above) you’ll see clear reference to the Blue Note label. I rest my case!

Weiss is the newest member of trio and the album title is a tongue-in-cheek reference to him. Oddly in May last year DLO3 (that’s how they abbreviate their name) issued a single  called ‘Cold As Weiss’. It was a tough and tight old school, organ led soul-jazz workout – but it’s not included on the album – hence my “oddly” (above)! What you get across the concise 9 tracker is a sound that echoes the same toughness, tightness and soulful-jazziness of that one ! Throughout you’ll enjoy an old school amalgam of soul-jazz, Booker T Stax stylings (in places James’s guitar work is “very Steve Cropper”) and sparse Meters style funk – all  delivered with a sense of fun – witness the album’s opener, ‘Pull Your Pants Up!’. This one, we’re told, is because bandleader, Lamarr when playing live, was getting fed up with constantly seeing guitarist James’ mooning backside because his pants were too loose and too low slung!

Amongst other highlights is a cover of the Leon Ware/Marvin Gaye tune ‘I Wanna Be Where You Are’. It’s the sort of thing the MGs were doing in the 60s. More shades of Booker T on ‘Slip N Slide’. ‘Uncertainty’ is the LP’s slower moment while the trio tip their hats to the blues on the grinding ‘Big TT’s Blues’ (melody rather reminiscent of ‘Lonely Avenue’).

The Delvon Lamarr Organ Trio: Cold As Weiss is released via Colemine on February 11th.