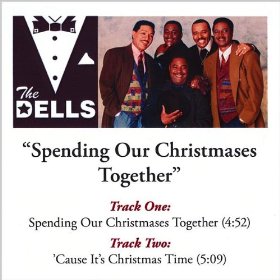 2012 sees the Dells celebrate their 60th anniversary in the music biz. Fittingly, all kinds of releases are planned to tie in with this career landmark and this 2CD, 44 tracker is the first. The album covers the group’s early recording career, 1954 – 1961. It begins with four cuts that they recorded for Chess under their original name, the El Rays. Two attempts at ‘Darling I Know’, ‘Christine’ and a stab at Willie Dixon’s ‘So Long’ failed to chart so the group changed their name to the Dells and moved to Chicago’s “other” big label, Vee Jay.

The best of the group’s Vee Jay output makes up the bulk of this collection and it naturally features their biggest hit for the label – 1956’s classic ‘Oh What A Night’ (later re-recorded at Chess, of course). Also included is the beautiful ballad ‘Dreams Of Contentment’ and the heartfelt ‘I’m Calling’. Both classic doo-wop moments but listen hard (especially on the latter) and you’ll hear the roots of the Dells’ distinctive and unique soul harmony style.

Serious Dells collectors will already have most of the tracks but this set’s bonus is a quartet of previously-hard-to-find recordings. In 1961 the boys were drafted in by Dinah Washington’s management to provide backing vocals for their star’s ‘Tears And Laughter’ album. With a young Quincy Jones producing, they backed Ms. Washington on three tunes – ‘Wake The Town And Tell The People’, ‘Mood Indigo’ and ‘Am I Blue (actually a duet with Dells baritone, Marvin Junior). All three are included here along with a version of ‘Jeepers Creepers’ which the group recorded sans Washington but with Jones behind the desk.

The succinct sleeve notes from Dells expert David Yeats tells the full story of those Mercury sessions. He also offers enough of the group’s history to satisfy anoraks everywhere. For instance, he tells us that bass man Chuck Barksdale was absent for the recording of ‘Oh What A Night’ (he was on the road with Otis Williams and the Charms) and that between 1958 and early ’61, because of a serious road accident, Vee Jay used whatever Dells were available in tandem with people like Dallas Taylor (the Danderliers) and Lawrence Brown (the Kool Gents). But really it’s the music – not the facts – that’s important and the set is just a wonderful summation of the early days of true soul institution.