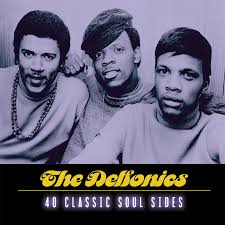 The Delfonics are one of soul’s few truly unique groups. They had a sound all their own and were responsible for creating a whole new soul sub-genre, “Symphonic Soul”. Helping them to achieve all this was a certain Thom Bell. Born in Jamaica, Bell enjoyed classical music training and eventually ended up a staff/sessioneer for Philadelphia’s Cameo-Parkway Records. By the mid 60s the label were obsessed with catching up with Motown and they charged Bell with putting together a studio band to rival Detroit’s Funk Brothers. But as he rounded up people like Vince Montana, Ronnie Baker, Bobby Eli Norman Baker and Don Renaldo he was approached by a local music hustler called Stan Watson who wanted him to work with a band he managed. Bell saw promise in three of Watson’s quintet and agreed to work with them. Thus, were born the Delfonics… William “Poogie” Hart, his brother Wilbert and Randy Cain.

Bell and his “band” set to work right away but at first Cameo-Parkway didn’t want to know so their first record came out on Moon Shot. Parkway then stepped in and offered to release the group’s next single but when ‘You’ve Been Untrue’ floundered Watson and Bell decided to start their own label…. Philly Groove, and the rest, of course, is history.

Between 1968 and 1974, the Philly Groove-pacted Delfonics notched up 18 US pop hits which included 2 top ten smashes and en route they (and Bell) laid the foundations for what became the Philly sweet soul sound. The secret of their success? Well all three band members had great, well-matched soul voices with William Hart’s in particular being totally unique. Then there were the songs – most crafted by William and Bell – that spoke to a more sophisticated more affluent generation of Afro-Americans. Add to that the productions and arrangements of Thom Bell and you have pure sophisticated soul magic. Bell blended elements of singer Little Anthony’s heritage with the writing and production skills of people like Teddy Randazzo, Don Costa and Burt Bacharach and created his own remarkable sound typified by the timeless ‘La La Means I Love You’ which anchors this new retrospective from Real Gone Records.

This two CD set offers 39 more gems of sweet soul that though now well over 40 years old still sound so fresh and vital that it’s no exaggeration to say that every soul home should own one.