THE CONTOURS; Dance With The Contours (Kent) 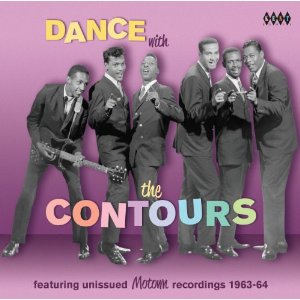 The Contours were there almost at the birth of Motown. They gave Gordy early hits in the form of ‘Do You Love Me’ and ‘Shake Sherrie’ and off the back of those hits they featured in the Motown revues and even released a studio LP (quite an achievement in 1962). Two more hits were to follow – ‘Can You Do It’ and ‘Can You Jerk Like Me’ and it seems that the group (with an ever changing personnel list) were scheduled to release a second LP. Different Motown historians have conflicting views on this. Some say no such album was ever planned while others say that an 11 tracker called ‘Dance With The Contours’ was pencilled in for 1964… but nothing materialised. Whatever, the group did record prolifically between 1963 and 1964 and here Kent have assembled most of that material and the compilers are fairly confident that this CD’s first 11 cuts were the ones that would have made that mysterious long player. The album’s other 15 cuts consist of contemporary Contours’ material – so the set comprises a big 26 tracks of which 24 have never previously been issued.

It probably won’t surprise you to learn that much of the material is in the novelty dance bag – and consists of various remoulds of ‘Do You Love Me’ and ‘Shake Sherrie’. When we have titles like ‘Let’s Do The Uncle Willie’, ‘Okey Dokey’ and ‘Minnie The Ugly Duckling’, you know we’re not talking deep soul. But hey, we are talking about good times – and by all accounts the Contours had a manic stage act and they needed material to match. It’s all wild and energetic and the Funk Brothers are in top rocking form. Perhaps the most subtle cut is ‘The Limbo Is Here To Stay’ – one of Norman Whitfield’s first Motown productions, while the only track with a slightly different side is the sweet ‘You Hurt Me So’. This one features the redoubtable Andantes on back up. There’s a feel of early Temptations to this one and it stands out simply because it is so different … for the early Contours, that is. As a slab of vintage Motown it’s spot on. Ditto the whole album.