THE CONTOURS and Dennis Edwards; Just A Little Misunderstanding (Kent) 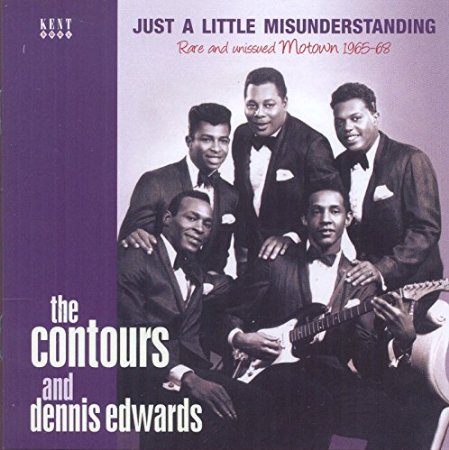 Since they struck up an association with Motown Ace/Kent have released lots of memorable archive material including a great set on the Contours – the very first of Berry Gordy’s groups to top the R&B charts. That feat, of course, was achieved with ‘Do You Love Me’ but as that first Kent Contours’ album proved there was much more to the group that that raucous call to the floor. Oddly despite that initial success the group didn’t move on to bigger things; they kind of loitered in Motown’s second tier but they constantly recorded in the hope of finding a new breakthrough, Again oddly, most of what they recorded was never officially released and like that aforementioned first Kent Contours’ set, this new collection is stuffed with previously unreleased cuts – 12 in fact.

Amongst those unreleased gems are a new versions of ‘First I Look At The Purse’ and ‘Baby Hit And Run’… both essentially the well-known tracks, but with a different lead voice. In the first instance it’s Billy Gordon; in the second the “new” voice belongs to Jerry Green. You also get a great version of ‘Come See About Me’ with Levi Stubbs’ brother Joe’s on lead and a churchy cover of Percy Sledge’s ‘When A Man Loves A Woman’.

Interestingly the album also features eleven Dennis Edwards’s solo efforts. Edwards was the last “official” lead singer in the Contours and It’s usually assumed that he joined the Temptations straight from the Contours. In fact, as the anoraky notes point out, he was in an odd state of limbo before joining the Tempts – working with the Contours and cutting solo material… and it’s that solo stuff that gets a welcome airing here. Most of the tunes are Motown chestnuts like ‘What’s So Good About Goodbye’, ‘I’ll Turn To Stone’ and ‘Ain’t That Peculiar’. He has a great stab at Bobby Hebb’s ‘Sunny’ too and throughout you can hear why the Temptations were so keen to have him replace David Ruffin.

Contours or Edwards…. this is all fabulous Motown archive material and the copious, informative notes make this release a must for all proper soul collectors.