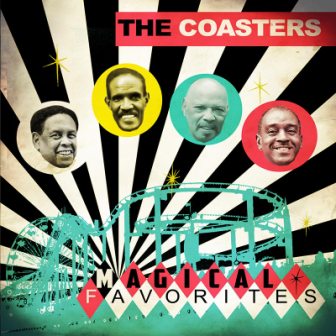 The Coasters are a soul music institution. They began more than 60 years ago and have an enviable list of chart hits, Sure, most of their biggies – ‘Yakety Yak’, ‘Charlie Brown’ and ‘Poison Ivy’ amongst them – were back in the 50s and early 60s but dig ’em out… they still sound fresh, vital and full of energy and don’t forget that back in the day most beat groups (including the Beatles and Stones) included Coasters’ songs in their repertoire! After the hits dried up, the Coasters continued to work and even today they’re a big draw on the lucrative oldies circuit. Naturally, the years have seen numerous personnel changes. None of the original line-up is still alive while the team that were inducted into the Rock and Roll Hall of Fame in 1987 (original member Carl Gardner, Billy Guy, Will Jones and Cornell Gunter) are no longer band members. The current line-up is Joe Lance Williams, Primo Candelara, Dennis Anderson and Eddie Whitfield… but does it matter that there are no originals still active? Like the Drifters (even the Temptations and the 4 Tops), the Coasters are a “brand” and people flock to their shows knowing what they’re going to get … all the hits and a bloody good time!

The current Coasters were selected to carry on the group name by Carl Gardner and they’ve just released this new 14 tracker, which, were told, is an assembly of some the group’s favourite songs. At first glance it’s a real old mixed bag…. plenty of soul classics (‘Turn Back The Hands Of Time’ and ‘Sittin’ On The Dock Of The Bay’ amongst them) but you also get a smattering of early Rock n Roll (Elvis’ ‘Don’t be Cruel’ ), a couple of Sam Cooke songs, a cover of the Everly Brothers’ ‘Dream’, a stab at a Barry White number and several oddities like the Eagles’ ‘Lyin’ Eyes’ and Jim Croce’s ‘Bad, Bad Leroy Brown’. What all the songs have in common, though, is that they all allow the veteran vocalists to show off their harmony skills. Interestingly some of the backing tracks behind the well-honed vocals sound uncannily like the originals…. I’m thinking of the versions of ‘Cool Jerk’ and ‘Just My Imagination Running Away With Me’. But my ears aren’t what they were so I wouldn’t testify to plagiarism in a court of law! What I would attest to, though, is that these Coasters are doing a great job keeping the good time legacy of the “brand” alive!