THE CLARK SISTERS: You Brought The Sunshine (Westbound/Ace) 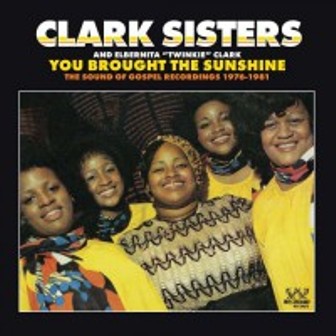 Any self-respecting gospel fan will tell you all about the Clark Sisters. They’ll be delighted to tell you that, marshalled by mother Mattie Moss Clark, Elbernita, Jacky, Denise, Dorinda and Karen changed the face, image and sound of modern gospel music, giving it a contemporary edge and widening its appeal. If you don’t know too much about the Clark girls or indeed gospel, this new 17 track compilation from Ace Records’ link with Detroit label Westbound will serve as a most excellent introduction.

First though a little background. Clark matriarch Mattie was a leading figure on Michigan gospel circuit in the 60s and she raised her five girls in the true gospel tradition. As a group, the Clark siblings made their recording debut for their uncle’s Bilesse label. What they recorded was traditionally gospel but their panache and passion (especially of lead voice Elbernita, dubbed “Twinkle”) soon brought the girls plenty of attention from the secular record business. Armen Boladian of Detroit’s Westbound label was particularly impressed and despite some misgivings from mother, he signed the Clarks to his Sound Of Gospel subsidiary and tasked producer Bernie Mendelson to give the group a more contemporary sound in the way Stax had done with people like Rance Allen. Mrs Clark was dubious but her girls were now adults – they enjoyed the music of Motown, Aretha and Westbound colleagues like Denise LaSalle and the Detroit Emeralds – and in Twinkle they had a feisty and determined leader so the move to a more contemporary sound was in many ways inevitable.

Hear that contemporary sound at its best on this collection’s opening cut (and the track for which the set is named) – ‘You Brought The Sunshine’. Written by Elbernita and loosely based on Stevie’s ‘Masterblaster’, the song was championed by people like Frankie Crocker and it quickly became a club hit… the Clark Sisters were even invited to play at Studio 54 – a far cry from the store front churches they’d been used to! Naturally this secular success didn’t please everyone in the gospel community (echoes of Sam Cooke?) but the girls were on a roll and enjoyed more ensemble success while Elbernita recorded her own solo material too. The best of all that output is all here.

The Clark Sisters disbanded in 1994 when their mother died; some of the girls went on to record solo and they reunited briefly in 2007 for a live album but their collective, best, pioneering work is all included in this lovely  Ace retrospective.