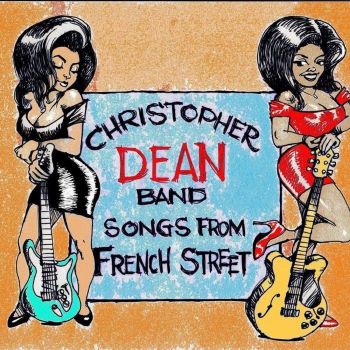 The Christopher Dean Band work out of New Jersey where they enjoy a stellar reputation for peddling the very best in blues and soul and they have a couple of great albums under their belt. The last one was 2014’s ‘Call Me Later’ but since then Christopher has had to face some serious issues. Relationship problems were compounded by some major reconstructive surgery after (I’m guessing) an accident. That all meant that Chris’ music was side-lined but early last year he manged to get back into his stride; then of course a little thing called Covid arrived! In and out of lockdowns and in and out of various studios our man was determined to carry on. With the help of special friends – guitarist Johnny Rawls, organist Carl Snyder and producer/mixer Taj Jackson, Chris manged to complete a new album which has just won release.

The album is called ‘Songs From French Street’ in gratitude to the staff of New Jersey’s Robert Wood Johnson Hospital where the orthopaedic ward was called “French Street” and like the Band’s previous albums it’s a set of original songs peppered with some well chosen covers.

Amongst the Dean originals are a lovely ‘Watching Me Watching You’ –  a classic blue-eyed soul outing and a finger-clicking, laid back, jazzy charmer ‘Not That Kind Of Man’. The album opener, ‘Can I Get It’ is another original song… this time from the pen of Johnny Rawls. It offers that lovely brassy Chicago soul sound (think Tyrone Davis) which is echoed on ‘Without You In My Life’. Dean’s ‘My Woman Tonight’ is a lovely, sweet confection (inspired by a new, loving relationship?) and it’s a striking counterpoint to some of the album’s bluesier moments like ‘You Walked Away’.

Chris Dean’s penchant for the blues is apparent through the album. The set’s two bonus cuts are covers of Muddy Waters’ ‘Gypsy Woman’ and Memphis Minnie’s ‘Nothing In Ramblin’’, while on the album proper there’s a swinging version of Otis Rush’s ‘Keep On Lovin’ Me Baby’.

For soul fans the album’s focus cover is a respectful treatment of Curtis Mayfield’s ‘This Is My Country’ which the band offer as their homage to BLM. While for real variety why not try the lounge jazz standard ‘I Miss You So’? It’s probably best known in its Nat King Cole version and though Chris is no Cole (he’d be the first to admit that!) he acquits himself wonderfully. It adds real variety to an honest and heartfelt collection. Despite a myriad of problems, ‘Songs From French Street’ has been crafted with love and enthusiasm for the music. You can hear that in every track… and there aren’t that many albums that you can say that about.