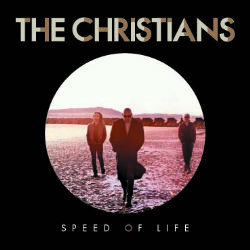 In the 80s Liverpool band The Christians enjoyed healthy chart success. Songs like ‘Forgotten Town’, ‘Ideal World’ and a cover of ‘Harvest For The World’ became radio mainstays and their eponymous debut album and its follow up ‘Colours’ went to #2 and #1 on the LP charts. Too quickly though the band (essentially three brothers – Garry, Roger and Russell Christian and Scouse muso Henry Priestman) dropped off the radar. 1995 Garry cut a solo album all but disbanding the group and the premature death of Roger in 1998 reinforced the band’s demise. At the beginning of the new millennium, though, Garry resurrected the band. With new sidemen Joey Ankrah and Neil Griffiths and support musicians, the Christians began to tour again and they’ve just released this – a brand new album – exactly 25 years since the release of that debut set.

The good news for fans of that album and ‘Colours’ is that the Christians’ sound is essentially the same – that is gritty pop/soul anchored by Garry Christian’s intense and committed vocals. Best cut amongst the ten on offer is the melodic beat ballad ‘Remedy’. Elsewhere there are plenty of sombre ballads like ‘Steal Away’ and ‘Speed Of Life’ and catchy, Beatle style guitar-led beaters (try ‘A Dog And Its Day’). The LP’s other predominant flavour is folksy/pop –typified by the opener ‘And My Ship Was Coming In’ while the album’s only cover is a take on Marvin Gaye’s ‘Inner City Blues’. It’s perfectly adequate but begs the question “why?” It adds nothing new and the only explanation I can come to it for its inclusion is that its dark depth, sombre mood and inherent pessimism fits the album’s overall mood. Therein lies what I think is the problem with ‘Speed Of Life”. It’s just too stark and sombre … but maybe that’s what Christians’ fans expect. In the 80s there was an heaviness about their music and now 25 years later it remains.