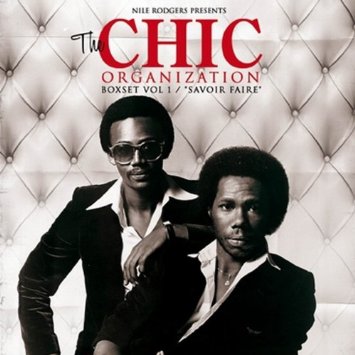 A victim of pop’s notoriously fickle nature, Chic went from being perceived as ultra-hip to seriously un-cool in the space of a couple of years, a fact that was reflected in their rapid chart decline. Formed in ’77 by songwriters/producers Nile Rodgers and Bernard Edwards, they rode high on a hedonistic mirrorball wave in the late-’70s with global smash hits such as ‘I Want Your Love,’ ‘Le Freak’ and ‘Good Times.’ Their success, of course, wasn’t limited to their own projects and they helmed big hits for Sister Sledge, Diana Ross, Debbie Harry and others. But the Chic bubble burst around 1981 and although they soldiered on for a few more albums, interest in the group waned and they eventually dissolved. But as individuals and working apart, Rodgers and Edwards established themselves as go-to producers in the pop world during the ’80s.

Fast forward to May 2013 and Nile Rodgers – who’s been battling with cancer during the past couple of years – is back in the groove, co-writing and adding his distinctive choppy rhythm guitar to Daft Punk’s addictive chart topper ‘Get Lucky.’ Given Rodgers’ current cachet, high profile and the enduring influence of Chic’s music, this 4-CD boxset (first released in France a couple of years ago and which is now given a belated but welcome UK visa) offers a prime opportunity to appraise the organisation’s output in the late-’70s and early-’80s.

This 46-track anthology cherry picks the best of Chic’s glory years – as well as undervalued cuts from their twilight period – and includes all of their key outside production projects from the same timeframe. It’s a great listen and demonstrates why the likes of Daft Punk have desired to tap into the addictive Chic vibe. The band’s career kicked off with ‘Everybody Dance’ in ’77, which was followed by ‘Dance, Dance, Dance’ – but by ’78, original lead singer, Norma Jean Wright, left to pursue a solo career, which was masterminded by, ironically enough, Rodgers and Edwards, and a couple of her forgotten but worthy Chic-helmed tracks (‘Saturday’ and ‘Sorcerer’) appear on the box set.

All of Chic’s significant singles plus key album tracks – including the classic ‘At Last I Am Free’ – are featured as well as overlooked gems from the early ’80s like ‘Hangin’.’ Rodgers/Edwards were also responsible for big hits recorded by Sister Sledge (‘He’s The Greatest Dancer,’ ‘We are Family’ and ‘Lost In Music,’ all featured) plus Diana Ross (‘Upside Down’ and ‘I’m Coming Out,’ though Chic’s originally mixes that Ross discarded are included).  Blondie singer, Debbie Harry, was also a recipient of Rodgers/Edwards’ production skills but unexpectedly didn’t reap chart gold – others produced by the duo were French disco group, Sheila & B Devotion, whose ‘Spacer’ wasn’t a massive hit but was unequivocally one of Chic’s finest outside production jobs. It’s included here as are some tracks by singer, Fonzi Thorton, a New York session singer who sang background vocals on Chic tracks and briefly stepped into the limelight (though unsuccessfully) plus unreleased cuts that Rodgers/Edwards cut on Johnny Mathis and a few Chic outtakes, though there’s nothing truly revelatory among the previously unissued material. There are also some tasteful remixes by Dimitri from Paris, who brings a contemporary crispness to his versions without sacrificing the distinctive characteristics of the originals.

Overall, this is a fabulous package that reaffirms that Chic were much more than an ephemeral, here-today, gone-tomorrow disco act – they were one of the best self-contained R&B bands of all time and their musical legacy is truly a potent one. Just ask Daft Punk.